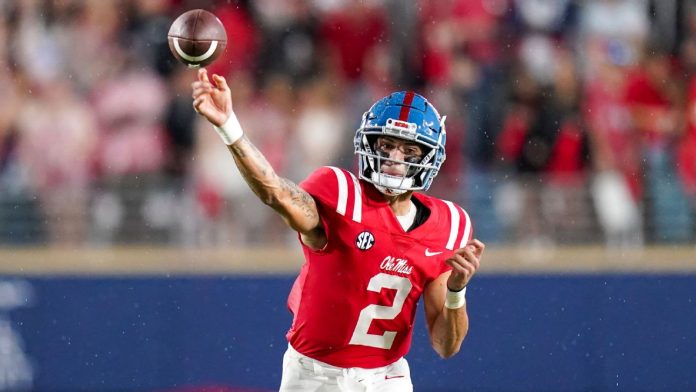 We learned that when UCLA pulled out of the Holiday Bowl just five hours before kickoff, and that left the North Carolina State staff hopping mad. For one thing, that screwed them out of a chance at additional bonuses, not to mention left them in a lot of debt on the expenses for the trip.

So keep in mind that if someone sneezes or starts coughing, we may see one or two of these games disappear, as we present our….

The people at Penn State seem to be happy that QB Sean Clifford is coming back for a sixth season. He is steady, if not spectacular, and this offense is lost without him (and he has been slowed by various injury problems). But will Clifford be lost without Jahan Dotson, who caught 91 passes for 1182 yards and is opting out to get ready for what might be a very early call in the NFL Draft?

If James Franklin’s team had some great balance, they might be able to write a different story, but they have averaged just 3.2 yards per carry, so there is a challenge to be met, even against an Arkansas defense that has at times been found extremely wanting (for example, allowing 671 yards to Alabama).

Speaking of defense, the Nittany Lions are missing several key contributors on that side of the ball, as they are going to work on draft prep. And the Hogs have some missiles to throw at them. They chew up 4.8 ypc, but they don’t need to run the ball all the time; in fact, this is a very efficient passing team behind KJ Jefferson, who has completed two-thirds of his passes with a ratio of 21 TD’s to just three interceptions.

Arkansas is a program in the nation’s toughest conference (SEC) that appears to be on the rise. And that often crafts a formula for a good effort in a bowl game, although we do admit some concern about the SEC losing its first four bowl games of the season.

Here are a couple of programs that are living by defense right now. And the Irish did what many expected and hired defensive coordinator Marcus Freeman to replace Brian Kelly, who ditched the team for more money at LSU.

Betting football – Make Your Sportsbook Pay You This Year

The best player on the Notre Dame defense won’t be on hand, though. Kyle Hamilton is such a highly-regarded safety that he is being strongly considered as a top-five pick in the NFL Draft (rare for someone at his position), and he has opted out of this game to prepare for that.

Running back Kyren Williams has opted out too, and that leaves the Irish with limited option on offense. QB Jack Coan has been serviceable, but he isn’t really a game-changer.

For that matter, neither is OSU quarterback Spencer Sanders, although he is relatively nimble and DOES have his top running back (Jaylen Warren, with 1134 yards) on hand. OSU is third in the nation in total defense, and will have the services of its coordinator, Jim Knowles, who will depart for Ohio State after the game. The Cowboys have conquered some high-powered sides, and while Notre Dame throttled Wisconsin before the Badgers really go their ground game going, they lost their sternest test by double digits at home against Cincinnati.

We have to admit that there is very little we like about the Iowa offense, which wasn’t going to take the Hawkeyes very far.In fact, you saw the effect of it in the 42-3 loss to Michigan in the Big Ten title game.

Why Betting with the Offshore Sportsbooks Has Its Advantages

Iowa doesn’t run very well (3.3 ypc) and the quarterbacks (Spencer Petras and Alex Padilla) are rather pedestrian, and whatever threat they actually DID have, in the person of running back Tyler Goodson (who gained 1151 yards) has evaporated, since he decided to skip this bowl to concentrate on improving his NFL chances.

Kentucky’s Will Lewis (23 TD passes) is the better quarterback, and Chris Rodriguez (1272 yards) is the best running back on the field. The ‘Cats gain 2.1 more yards per play than the Hawkeyes. Ouch! There’s a formula for victory for coach Mark Stoops, who will feel bittersweet about it since Iowa is his alma mater.

Here’s one that deserves perhaps some extra contemplation, since there would appear to be a disparity in the quality level between these two conferences (the Big Ten and the Pac 12), although it is well worth noting that Oregon, which was beaten not once, but twice by Utah, pinned a defeat on the Buckeyes.

Use multiple sportsbooks to shop for betting lines

And then there is the “disappointment” factor. Ohio State obviously aspired to be in the playoff, and that crushing loss to Michigan has left, well, that crushing feeling.

But you know, if this team can channel that correctly, they can create a major positive. Nobody has to worry about opt-outs with quarterback CJ Stroud (71%, 38 TD’s, five INT’s) or running back Treveyon Henderson (7 ypc, 21 total TD’s), because they are freshmen. Receivers Garrett Wilson and Chris Olave, who might both go in the first round, have opted out, but Jaxson Smith-Njigba (1259 yards in receptions) is still there, and the top WR recruits in both the 2020 (Julian Fleming) and 2021 (Emeka Ogbuka) will get their chance, as will Marvin Harrison Jr., son of the Hall of Famer.

But there might be a timing issue, and the offensive line had to be reshuffled with LT Nicolas Petit-Frere opting out. CJ Stroud was harassed endlessly by Michigan’s pass rush, and Utah has 41 sacks.

The Utes, with people like RB Tavion Thomas (5.6 ypc), can compete physically at the line of scrimmage, and we’ll look for some ground-and-pound, in an attempt to keep the ball out of Stroud’s capable hands.

In some ways, this is the most intriguing of the New Year’s Day bowl games. People sometimes are so busy thinking of Lane Kiffin as a brat that they forget what a brilliant offensive mind he is. And with the nation’s leading offense, he’s had a lot of time to figure out how to poke holes in the stop unit of Baylor Dave Aranda, who’s kind of a budding genius on that side of the ball.

Matt Corral is rolling the dice a little here. He might be the first QB taken in the draft, but he’s not opting out. Instead he’s playing, ostensibly because Kiffin has transformed him to a pro prospect. He also may be able to vault himself into the top five with a big effort.

We don’t know of any opt-outs with Ole Miss, in fact. Slight nod to the Rebels, who run the ball well enough to create a sufficient distraction.

Parlay payout can vary at different sports betting site, so is very important to review your current sportsbooks odds

Learn more about placing a parlay ; Parlays are an extremely popular form of betting within the world of sports. The reason parlays are so popular is their ability to pay-off the bettor in a big way, with just one wager.