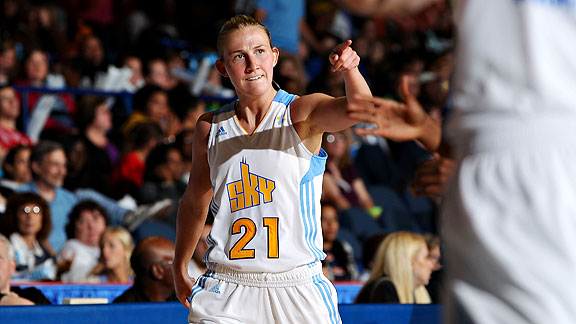 The top-ranked scoring offense in the WNBA will meet the worst defense in the league, as the high-flying Dallas Wings entertain the Chicago Sky on Tuesday night. The Wings, who average a league-best 87.9 points a game, dropped their final two games prior to the All-Star Break, but have still won seven of their last 10 to stay in the playoff hunt. Dallas is currently in sixth place, a half-game behind Phoenix for fifth, but also just a half-game head of Connecticut for eighth. Liz Cambage recorded 25 points on 11-of-19 shooting in the Wings’ final game before the break, but they also allowed Connecticut to shoot 50% in a 92-75 loss. Two days earlier, Cambage finished with 23 points, but the Wings allowed the Sky to shoot 56.8% in a 114-99 setback. Cambage scored a league-record 53 points against the New York Liberty two weeks ago, owns 11 double-doubles and is second in the league in scoring (22.1) and rebounding (9.4). Dallas also owns the worst scoring defense of any team in the top eight as it allows 83.3 points per game.

Chicago is a terrific three-point shooting team and are tied with Connecticut at 35.9% on the season but allows a league-high 90 points per game. Chicago entered the All-Star Break by winning two of three after losing five in a row from July 10th to July 18th. The Sky scored at least 100 points for the third time this season when they shot 55.7 percent in a 101-87 win at Phoenix on July 25th. Rookie Diamond DeShields scored a career-high 25 points, while point guard Courtney Vandersloot had the league’s seventh triple-double with 13 points, 10 rebounds and 15 assists in the last meeting with Dallas. Fellow guard Allie Quigley also scored 21 points in that contest and enters the game after a big performance in Sunday’s 3-point competition. She totaled 29 points, setting a record for most points scored in the competition in either the NBA or WNBA.

The teams have split their first two meetings with the home team winning easily in each and scoring over 100. Both games have also gone way over the total and I expect this one to do the same. But, my official play will be with Chicago and the points. Dallas has been giving up too many points lately and the Sky offense is starting to click behind Vandersloot – the former Gonzaga Bulldog.