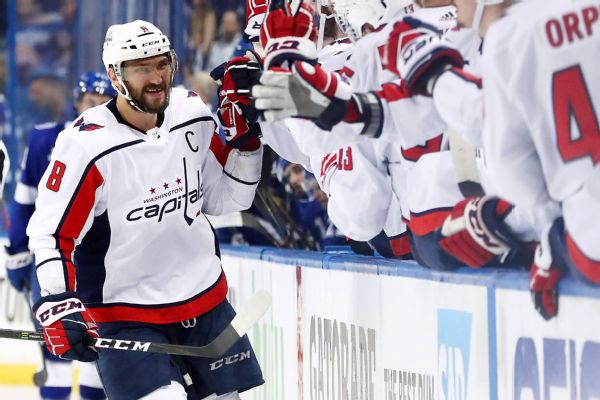 Its going to be hard to top Game 1 of the 2018 Stanley Cup Finals, but the Washington Capitals and Vegas Golden Knights will lace up the skates for what should be an exciting Game 2 on Wednesday night from T-Mobile Arena in Las Vegas, Nevada. Fourth-liner Tomas Nosek scored the go-ahead goal midway into the third period and added and empty-netter in Monday’s 6-4 triumph for Vegas, which has outscored the opposition 31-16 en route to posting a 7-1 mark at home in the playoffs. Vegas’ lone postseason home loss came in double overtime on April 28th, a 4-3 decision against the Sharks in Game 2 of the Western Conference semifinals. Nosek, who has eight regular-season goals in 84 career contests, owns four points (three goals, one assist) in his last three games while linemate Ryan Reaves has scored in back-to-back contests for the first time since April 6 and 8, 2017. Evgeny Kuznetsov recorded an assist in the back-and-forth series opener to extend his franchise-record postseason point streak to 11 games, during which the 26-year-old Russian has scored six goals and set up 10 others. Goalies Marc-Andre Fleury and Braden Holtby, who both game in red-hot, showed some rust after the lengthy layoff, recording sub .900 save percentages.

The big question heading into Game 2 was whether or not defenseman Tom Wilson would be suspended after he blindsided Jonathan Marchessault. He will not have a hearing as the NHL’s Department of Player Safety citing that it was shoulder to shoulder rather than to the head and that it was in the flow of the game. Wilson, who received a three-game suspension in the Eastern Conference semifinal series against Pittsburgh, said he has no plans to change his playing style. John Carlson scored his 17th career playoff goal in Game 1 to move past Kevin Hatcher for the most by a defenseman in franchise history.

First-liner Reilly Smith continued his solid play by scoring a goal and setting up another in Game 1, giving him 18 points (three goals, 15 assists) in 16 games. Marchessault has done him one better with 19 points (eight goals, 11 assists), snapping a tie with New York Islanders’ Jude Drouin (1975) and San Jose Sharks’ Igor Larionov (1994) for the most with a franchise in its first-ever postseason. Marchessault, who set up Smith’s second-period goal, has four assists in three matchups this season against Washington.

The lack of defense and soft goaltending led to the total easily going over. Vegas’ speed got the better of Washington in Game 1 and it might take another game for the Capitals to slow it down. The Capitals are always dangerous, especially on the power play, and I can see this going over once again. Maybe not 10 goals like Monday, but a 4-2 game is a strong possibility.