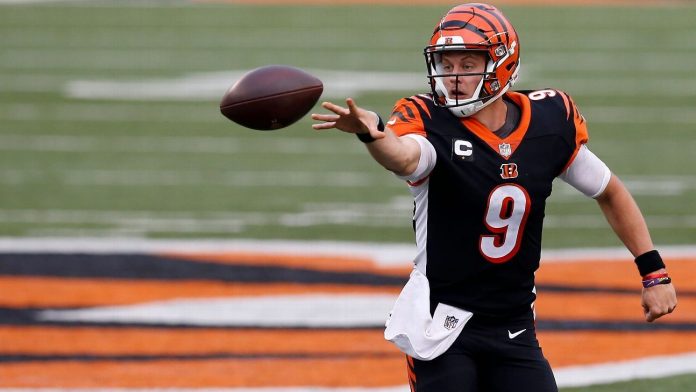 It’s another matchup of AFC North and former Heisman Trophy-winning quarterbacks, as the Cincinnati Bengals visit the Baltimore Ravens on Sunday Night Football on NBC. With the Steelers in rebuild-mode and the Browns without starting QB Deshaun Watson for the first 11 games of the season, the AFC North champion should come down to the Bengals and Ravens. Cincinnati took home the division last season and routed Baltimore in both contests, scoring 41 points in each. Right now, the Ravens are the -120 favorite and Cincinnati is +217. Joe Burrow threw for a combined 941 yards, the most by one QB against another opponent in any season, as the Bengals beat the Ravens 41-17 and 41-21 a year ago. Lamar Jackson missed the second game with an injury. The road team is 5-2 against the spread in the past seven meetings.

The Bengals dropped their first two games of the season after reaching the Super Bowl in February, but have come alive with back-to-back wins including a 27-15 home win over Miami on a Thursday night in Week 4. Meanwhile, the Ravens should be 4-0, but have surrendered and lost two big leads. In Week 2, they had a 28-7 halftime lead on Miami before losing 42-38. Then last week, Baltimore was up 20-3 right before halftime and didn’t score again in a 23-20 setback to the Buffalo Bills. Coach John Harbaugh made the decision to go for it on fourth-and-goal from the Buffalo 2-yard line with the game tied at 20 with 4:15 left. Jackson was intercepted on the ensuing play and the Bills used the rest of the clock and got a 21-yard game-winning field goal from Tyler Bass. The Ravens are 3-point favorites in this contest with a total of 48.

Cincinnati could also be 4-0 as it lost its first two games by just three points each and has followed that with back-to-back wins by double digits. The offensive line has improved dramatically in the last two games after allowing Burrow to get sacked 13 times in the two losses. In the Bengals’ win over Miami in Week 4 last Thursday, he took just one sack and threw for 287 yards and two scores. Last year, no quarterback was sacked more, and Cincinnati thought it had addressed the offensive line in the offseason. The defense has played well so far, ranking first in touchdowns allowed per drive and second in points allowed per drive. Defensive tackle DJ Reader missed Week 4 with an injury and remains out. Reader is terrific against the run and Cincinnati ranks fourth, giving up just 85.8 rushing yards a game. The Bengals are 7-1 against the spread in their last eight games after a win.

Baltimore is the first team in eight years to lose multiple games at home when leading by 17 or more points in a season and they’ve done it in both home games thus far in 2022. In the second half this year, Baltimore has given up an NFL-worst 1,019 yards while allowing 67 points. Jackson was 20-of-20 against the Bills, but threw for only 144 yards with a TD and two picks. He did lead the team with 73 rushing yards. On the season, Jackson has 893 passing yards, 11 touchdowns and four interceptions. He also has rushed for 316 yards and two scores, as the Ravens are third in the NFL with 29.8 points per game and fourth with 6.2 yards per play. Defensively, safety Marcus Williams (three), cornerback Marlon Humphrey (two) and Peters (one) have a combined six interceptions. Four Ravens missed practice Wednesday due to injuries, including running backs J.K. Dobbins (chest) and Justice Hill (hamstring).

Can the Ravens finally hold a lead and win a home game? Yes, I’m banking on that to happen this Sunday night. Jackson has been spectacular and even though the Bengals O-line has been better the last two games, I still don’t trust them to protect Burrow against this Ravens defense. I’ll lay the field goal.