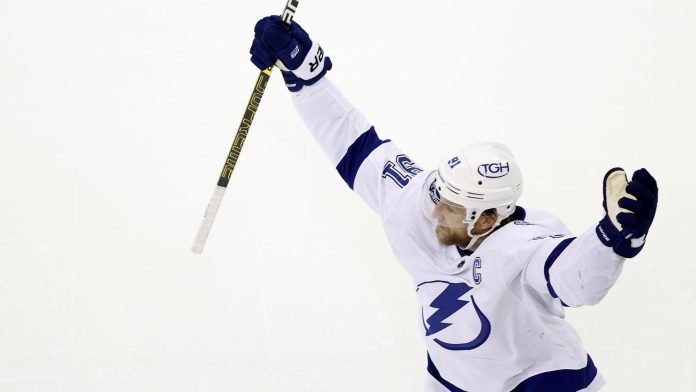 The Tampa Bay Lightning have made sure we will see at least two more Stanley Cup Final games by dominating the Colorado Avalanche on Monday night. Game 4 will take place Wednesday night at Amalie Arena, where the Lightning are a perfect 8-0 this postseason. Tampa Bay went down 1-0 in the first period before storming back to take a 2-1 lead after one period – their first lead of the series. Lightning went on to win 6-2 and can tie the series up on Wednesday. The Avalanche come into Game 4 as a slight -110 favorite while the total still sits at 6. The Over has hit in four of five games this season between the two teams, including all three games of the Stanley Cup Final. The Avalanche’s Game 3 loss was their first on the road, dropping them to 7-1 outside of Denver.

The Over has cashed in four of the last five Colorado games and the Avs are still -350 to win the series. Game 5 will be back in Colorado on Friday night.

Colorado outshot the Lightning 39-32 in Game 3, including 12-6 in the third period, but couldn’t get anything past Tampa’s Andrei Vasilevskiy. Gabriel Landeskog scored twice on the power play, but that was all the offense the Avs would get. Mikko Rantanen and Cale Makar assisted on both goals. After facing just 16 shots in a shutout performance in Game 2, Darcy Kuemper was chased from the game midway through the second period of Game 3 after allowing five goals on 22 shots. Pavel Francouz stopped nine of 10 shots in relief and could be in line to start Game 4. Kuemper is 8-3 with a 2.76 goals-against average and .892 save percentage in the playoffs, while Francouz is 6-0, 2.81 GAA, .906 SV. Andre Burakovsky (hand) and Nazem Kadri (thumb) are both listed as day-to-day and are questionable for Game 4.

Anthony Cirelli, Ondrej Palat, Nick Paul, Steven Stamkos, Pat Maroon and Corey Perry all scored for the Lightning on Monday. Nikita Kucherov and Victor Hedman each had two assists, but the former left in the third period with an apparent leg injury. Signs indicate he will play Game 4, but the same can’t be said for Brayden Point. Perry’s goal made him the first player in NHL history to score a goal in four different Stanley Cup Finals with four different teams (Anaheim, Dallas, Montreal and Tampa Bay). Vasilevskiy stopped 37 of 39 shots faced and is the seventh goalie in the expansion era with 10 or more wins in the Stanley Cup Final. The Lightning are 8-2 in their last 10 games after a win.

The Avalanche had some issues in goal right now and probably should start Francouz. Tampa has been playing great at home all postseason and are poised to send this series back to Denver all tied up.