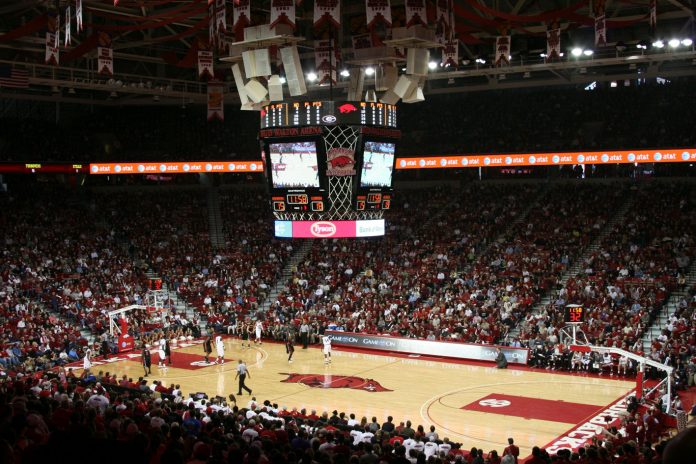 The surging Arkansas Razorback will get their biggest test to date when they host the No. 1 ranked Auburn Tigers on Tuesday night at Bud Walton Arena. The Razorbacks have won eight games in a row and have been favored in seven of them. They are also 7-1 ATS in that stretch after a 63-55 home win over Mississippi State on Saturday. They are tied with Tennessee for third place in the SEC at 7-3 and are 13-1 at home. Arkansas has held five SEC opponents under 60 points, but Auburn averages 80.3 points a game – good for 17th in the country. The Razorbacks won both meetings with Auburn last year, but are 1-3 ATS in the last four matchups.

The Tigers are sitting on top of the College Basketball world right now with not only a 22-1 SU record, but are an impressive 17-6 ATS. One of those non-covers came on Saturday when Auburn was nearly upset on the road by the Georgia Bulldogs. Auburn came into Athens as 16-point favorites and survived 74-72. Wendell Green Jr. raced down the court in the closing seconds only to lose the ball, get it back and drain the winning basket with 3.3 seconds on the clock. That helped prevent Auburn from losing for the first time since a double-overtime setback against then-No. 22 Connecticut on Nov. 24. The Tigers have scored 80 or more in seven of their 10 SEC games, topped by a 100-81 win over Alabama last Tuesday night. They have four players averaging in double digits.

Auburn survived a cold shooting performance against Georgia, connecting on only 39.7 percent from the field and 23.1 percent from 3-point range. Defense kept Auburn in the game as they held the Bulldogs to 40.7 percent shooting, while also going +6 on blocks and outrebounding Georgia by 11. Auburn ranks 13th with 116.5 points per 100 possessions. The Tigers, who have won seven in a row away from home, are 3-2 against the spread in its last five road games. Jabari Smith leads Auburn’s balanced lineup with 15.3 points to go with 6.7 rebounds, while K.D. Johnson is next at 13.5 points per game. Green averages 12.9 points and 4.8 assists and Walker Kessler averages 11.4 points and 7.9 boards a game. Kessler also ranks second in the country with 97 blocked shots.

During Arkansas’ eight-game winning streak, the Razorbacks have taken down solid teams like LSU, Texas A&M and West Virginia. The Razorbacks are having success on the strength of their defense that is No. 1 in the SEC with just 90.8 points allowed per 100 possessions. They have been even better during the winning streak, limiting opponents to fewer than 60 points a contest. Leading scorer JD Notae was just 4-of-16 shooting against the Bulldogs, but still finished with 14 points and has reached double digits in all 22 games in which he has played. Behind Notae’s 18.7 average is Au’Diese Toney at 10.8 a game to go along with 5.3 rebounds. Miami transfer Chris Lykes has six steals over the past two games. Arkansas is 4-1 against the spread in its last five games as the home team.

The No. 1 team in the country with only one loss is just a 2.5-point favorite against an unranked team? Seems like a trap to me and I’m not falling for it. The Razorbacks are a solid team and will be going to the Big Dance next month. Arkansas swept the Tigers last year, so they aren’t intimidated.