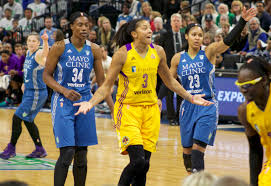 Open an Account at Bovada Sportsbook Now! Sign up at Bovada.lv to get up to a $250 Deposit Bonus and to bet all the Web’s best WNBA Basketball odds and props!

The Los Angeles Sparks will look to stay perfect at home when they host the Dallas Wings in WNBA action on Tuesday night at Staples Center. The Sparks have won three of their last four games with the only blemish being a 96-90 loss at Dallas on Friday. Los Angeles (5-3) is second in the WNBA’s Western Conference, 3.5 games behind the undefeated Minnesota Lynx and a half-game ahead of the Phoenix Mercury and Seattle Storm. Los Angeles is coming off an 89-87 victory over Phoenix as Chelsea Gray scored 24 points and Candace Parker sank a clutch 3-pointer in the final minute to help the Sparks hold on. In the loss to Dallas last week, Nneka Ogwumike recorded 28 points and 13 rebounds for the Sparks, while Parker posted 25 points with six rebounds and four assists. The Sparks shot 50 percent in the contest, but they made only 3 of 11 from 3-point range and were outrebounded 34-29. They also committed 15 turnovers.

Dallas come in with a 4-6 record and is fifth in the Western Conference and will try to bounce back from a 91-74 loss to Minnesota on Sunday. The Wings shot just 38.5% from the field and made only 3-of-17 from beyond the arc while allowing the Lynx to shoot 52.8%. Glory Johnson recorded a double-double in the Wings’ win over the Sparks last week, posting 24 points and 12 rebounds including 10 points in the fourth quarter. The Wings trailed by seven at the end of the third quarter, but they outscored the Sparks by 13 in the fourth for the upset victory. Skylar Diggins-Smith and Kayla Thornton scored 13 points apiece for Dallas while Theresa Plaisance had 11 and Kaela Davis added 10. Dallas is 11th in the league in points allowed (86.4) and 11th in three-point percentage (27.1). The Wings will be home to face New York on Friday.

We have the second best offense against the second worst defense in this one with a revenge factor. The Sparks blew the game to Dallas last week, but it won’t be close this time around.

CLICK HERE TO BET THE WINGS VS SPARKS GAME