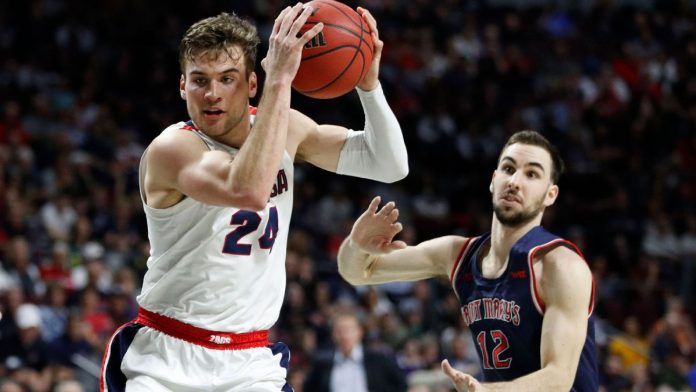 The Gonzaga Bulldogs are three wins away from a perfect season, but the level of competition is starting to ramp up. The Zags will look to punch their ticket to the Final Four when they take on the upstart Southern California Trojans on Tuesday night in Indianapolis. Of the 29 games that Gonzaga has played – and won – only one of them was by single-digits – an 87-82 win over West Virginia on Dec. 2. No point spread seems to be large enough for this Bulldogs team, who have steamrolled through the first three rounds including an 83-65 triumph over fifth-seeded Creighton on Sunday. The Trojans are one of the surprise teams from the Pac-12 who are still alive and they have also routed three opponents thus far in the tournament. USC beat the Oregon Ducks for the second time this season in an 82-68 win on Sunday and are 7-3 ATS in their last 10 games. The line has stayed steady and hasn’t moved since Gonzaga opened as 9-point favorites. USC has done well when they’re not favored, covering in nine of their last 13 games as an underdog.

USC is a No. 6 seed but playing more like a 1 or 2, using strong defense to get wins of 16 points over Drake, 34 points over Kansas and 14 points over Oregon. The Trojans held Drake and Kansas to 29 percent shooting and forced Oregon to shoot just 37 percent from the field. Star Evan Mobley, who led the Trojans in scoring during the regular season with 16.3 points per game, has put up just 10 points in each of the last two games, but is averaging a double-double through three games (12.3 points, 10.7 rebounds). The Trojans have an experienced guard in senior Tahj Eaddy, who just had 20 points with three 3-pointers in the win over Oregon.

One of the biggest factors for the Bulldogs in this tournament is their dominance on the glass. They’ve out-rebounded opponents by 35 and outscored them by an average of 25.7 points through three games. Drew Timme led the way with 25 points and six rebounds versus Creighton, while Corey Kispert and Jalen Suggs continue to have a strong tournament. Gonzaga shot 59.6 percent from the field against a Creighton team that was supposed to give the Bulldogs a bigger defensive challenge. If anything, that just further proves that Gonzaga’s offense is unstoppable. The Trojans have an elite defense, but Gonzaga’s offense has repeatedly been up for the challenge. Gonzaga has had wins over defensive-minded teams like West Virginia, Virginia and Oklahoma. So far this season, Gonzaga is averaging 92.1 points per game on 54.9 percent shooting from the field – both tops in the nation.

USC’s run will come to a screeching halt tonight. The Trojans defense won’t be able to slow down Gonzaga and the Bulldogs defense will also be up for the task. Look for Gonzaga’s double-digit point win streak to continue.