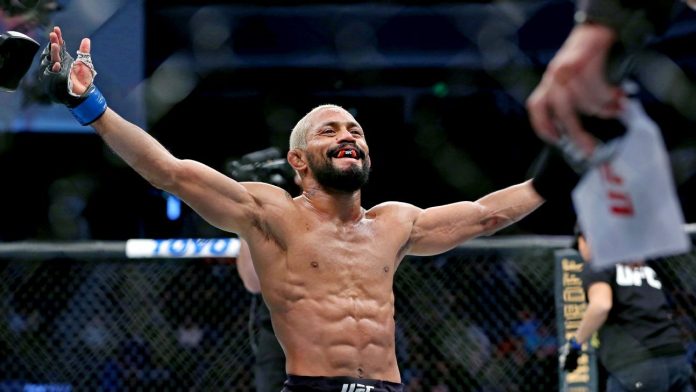 We have another solid card this weekend in the UFC with Fight Night July 18th from Fight Island outside Abu Dhabi. The main event will be a rematch between Deiveson Figueiredo and Josep Benavidez – a fight that was in jeopardy after the former tested positive for COVID-19 last week. Follow-up tests revealed he has been carrying the antibodies for the coronavirus after being case positive over two months ago.

Figueiredo stopped Benavidez with a controversial second round KO at Fight Night 169 in February, moments after an accidental head-butt badly cut Benavidez. Figueiredo is a strong striker who lands more significant strikes (52 percent compared to Benavidez’s 33 percent), but really excels in his grappling ability. Figueiredo averages 1.86 takdowns per 15 minutes with an accuracy of 50 percent and a submission average per 15 minutes of 2.27. He is reported to have completely recovered from an earlier bout with Covid-19 and has been deemed healthy and fit to fight.

Benavidez will need to learn from last fight, as he likes to stand in the pocket and throw powerful punches in the hopes of connecting and getting a knockout before his opponents have a chance to strike back. Benavidez is 28-6 and is a veteran at age 35, but has gone 0-4 in title fights. Before losing to Figueiredo, Benavidez had a six-fight unbeaten streak, which was snapped in a loss to Sergio Pettis in 2018. In 34 career fights, Benavidez has not lost back to back and actually had more significant strikes (46-25) than Figueiredo in the first match.

Prediction: Benavidez was looking good in the first match until that clash on the heads. Though medically cleared to fight, there are some concerns about Figueiredo’s training leading up to this Saturday. There are many ways to bet this fight, but I’m going the traditional way and backing Benavidez on the moneyline at +175.