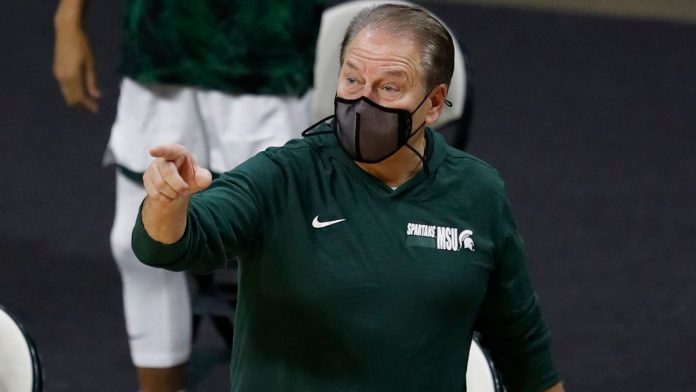 The NCAA Selection Committee made everyone smile on Sunday when they pitted two blue-blooded schools against each other in one of the First Four games coming up this Thursday night from Mackey Arena in West Lafayette, Indiana. The 11th-seeded UCLA Bruins and Michigan State Spartans will battle for the right to move into the field of 64 and face BYU on Saturday. UCLA (17-9) finished fourth in the Pac-12 regular-season standings and closed the season by losing their final four games including an upset loss to eventual-Pac-12 champion Oregon State last Thursday. The Bruins blew a 16-point lead and lost in overtime to the Beavers. All four of their losses came against teams that made it into the NCAA Tournament. It’s the first time UCLA will play in the First Four and 50th overall NCAA Tournament bid for the school – their first since 2018. It’s the 23rd straight appearance for Michigan State – a Big Ten record and fourth-longest in history. Michigan State is making its 34th appearance in the NCAA Tournament over with a record of 69-32 (.683). They reached the Final Four in 2019. The Spartans earned a spot with quality wins over Illinois, Michigan (both No. 1 seeds in the NCAA Tournament) and Ohio State (No. 2) but those were all at home. It’s the 11th all-time meeting between UCLA and Michigan State with the Bruins leading 6-4, but the Spartans having won the past two. The lone NCAA Tournament matchup between them came in 2011 when No. 7 UCLA beat No. 10 Michigan State 78-76.

The Bruins are led by Tyger Campbell (first-team All-Pac-12), Jaime Jaquez Jr. and Johnny Juzang (both second-team All-Pac 12). Head coach Mick Cronin is one of just five coaches in the nation to have led his teams to the past 10 consecutive NCAA Tournaments (previously with Cincinnati). The Bruins can shoot the ball from deep, finishing second in Pac-12 play with 39.0 percent shooting from behind the arc and third with a 47.0 field goal percentage. UCLA is also 26th in the nation in adjusted offensive efficiency with 114.1 points per 100 possessions. The over is 2-1 in UCLA’s last three games.

Michigan State was on the outside looking in last month, but the Spartans got some quality wins late over Indiana, Illinois and Ohio State all in a row. Then the Spartans ended their regular-season schedule with a 70-64 at home over No.1 seed Michigan. Michigan State fell to Maryland in the Big Ten tournament, but the resume was strong. Michigan State’s defense held opponents in the regular season to just 31.5 percent shooting from deep and that could be key against the strong shooting Bruins. Aaron Henry (15.3 ppg, 5.7 rpg), an Indianapolis native, is the club’s best player. The under is 6-0 in Michigan State’s last six games.

I have to go with the hotter team and the better coach in this one. Michigan State seems to always get dangerous this time of year. Although I don’t see them making a big run in this tournament, they are more than capable of winning this game on Thursday.