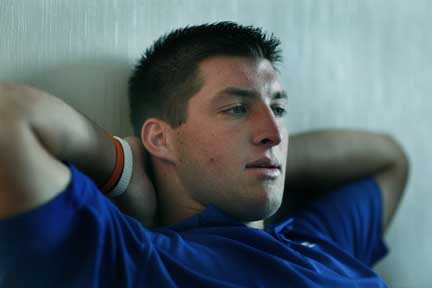 Tim Tebow has temporarily silenced his critics with his climb up the minor league ranks and on Wednesday, hit a two-run home run in his first day with the Class-A Advanced St. Lucie Mets. With all the hoopla surrounding him, the former Heisman Trophy winner and current New York Mets prospect remains a distant +1200 to make an MLB plate appearance in 2017.

With this week’s promotion by the Mets, Tebow makes his return to Florida, where he led the University of Florida Gators to a pair of college football national championships before being selected by the Denver Broncos in the first round of the 2010 NFL Draft. Tebow went on to play 35 NFL games with the Broncos and New York Jets between 2010 and 2012. He then took everyone by surprise by announcing his decision last summer to play professional baseball. He appeared in 64 games this season with the Class-A Columbus Fireflies of the South Atlantic League before getting promoted to St. Lucie.

Tebow began his first pro baseball season with a four-game hit streak before cooling off at the plate with his batting average dipping as low as .156. However, he showed steady improvement as the weeks went on, lifting his batting average into the .220’s, and his on-base percentage to a more respectable .311.

Tebow struck out on three pitches in his first plate appearance with St. Lucie, but settled down in the second half of Wednesday’s doubleheader against the visiting Palm Beach Cardinals, going 2-for-3, including his fourth home run of the season, to go along with two RBIs in the Mets’ 5-3 loss to the Cardinals.

If he can keep rising and eventually make it to the majors, he would join an exclusive list of former NFL players who also played Major League Baseball, including Deion Sanders and the legendary Bo Jackson, who both played in the MLB and NFL simultaneously. Former Atlanta Falcons safety Brian Jordan also played over 1,400 games with four teams during a 14-year MLB career after spending three years in the NFL.

However, Tebow still faces an uphill battle before fulfilling his dream of landing on an MLB 25-man roster. The Class-AA Binghamton Rumble Ponies would likely be the next stop if he meets the Mets’ expectations, but Tebow will face stiff competition for playing time in St. Lucie, where he will play alongside two of the Mets’ top prospects, Desmond Lindsey and Wuilmer Becerra. He has odds of +200 of making a AA plate appearance in 2017.