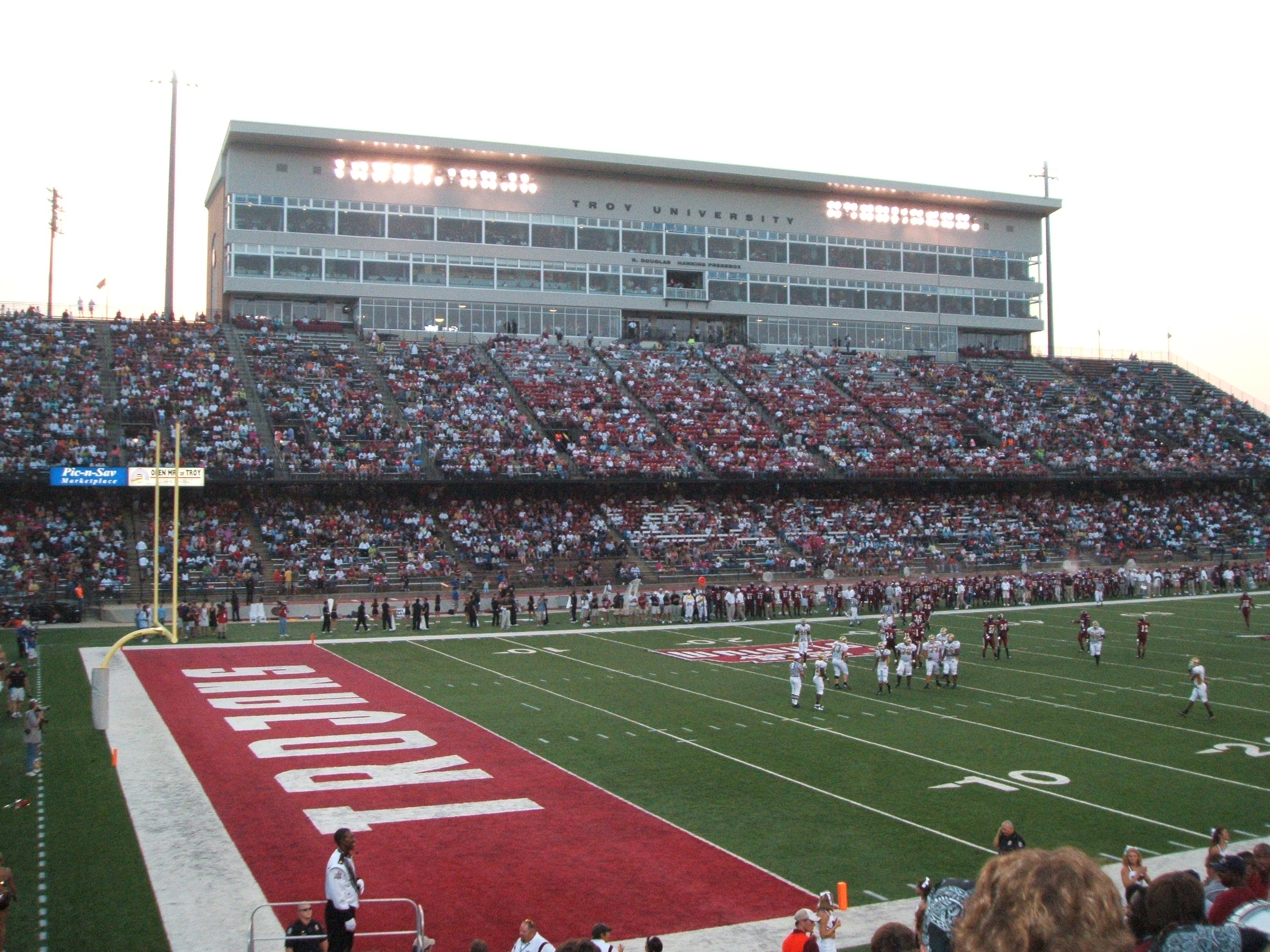 The Sun Belt Conference takes center stage in this midweek matchup between the South Alabama Jaguars and Troy Trojans on Wednesday night – broadcast live on ESPN2. This will be the sixth overall meeting in this series for schools that are only 200 miles apart. The Trojans have won two in a row against the Jaguars with both games decided by one score, but the road team has covered four of the last five. Troy gained national attention with their huge upset win at LSU on September 30th, but must focus on winning the Sun Belt before thinking about finishing the regular season as the top Group of 5 team. Troy finished conference play with a 6-2 mark last season. South Alabama is desperate for a victory after a 1-4 start to the season. The Jaguars opened the year with Ole Miss and Oklahoma State and lost by a combined 91-34. After a win over Alabama A&M, South Alabama stumbled in overtime (29-23) against the Idaho Vandals at home and lost to Louisiana Tech 34-16 on September 30th. With seven games remaining, it will be tough for the Jaguars to become Bowl-eligible as they have four road games left and host an improving ULM team and Arkansas State later this season.

In Troy’s upset victory against LSU, the Trojans ran the ball well by controlling the line of scrimmage. The offense generated 206 yards rushing and three scores for an average of 4.9 yards per carry. Jordan Chunn rushed for 191 of those 206 yards and enters Wednesday night’s game with 490 on the season. Chunn has posted back-to-back 100-yard efforts, and also has 17 receptions out of the backfield. Quarterback Brandon Silvers has taken a lessor role with the emergence of the running game, and has thrown just two TD passes after a career-best 23 last season. Silvers’ top target is Deondre Douglas with 22, but Emanuel Thompson (20), Damion Willis (14) and Tevaris McCormick (15) are also capable. Troy is ranked 24th in the country in points allowed (18.6) and 32nd overall (344.6 yards/game).

South Alabama is limiting opponents to 129 rushing yards per game through the first five, with Oklahoma State (163) posting the most yardage so far. The Jaguars have not allowed an opponent to finish a game with a per-carry average higher than 4.9 and surrendered just one run of 30 yards or more. Freshman linebacker Riley Cole (30) leads the improved defense, with Finesse Middleton (four tackles for a loss) and Tyree Turner (three) also having good seasons thus far. South Alabama enters Wednesday night’s matchup with the No. 9 ranked pass efficiency defense in the Sun Belt, having allowed 11 passing scores through five games and opposing quarterbacks are connecting on 65.4% of their throws against the secondary. South Alabama ranks 113th in total offense (329.0) and 99th in passing (186.8).

Though Troy’s win over LSU may have been a bit of a fluke, this team is pretty good. The rushing attack is one of the best in the conference and they were a strong team last year. Troy is just better overall and South Alabama will have a hard time scoring points. I’ll take the home team in a route.