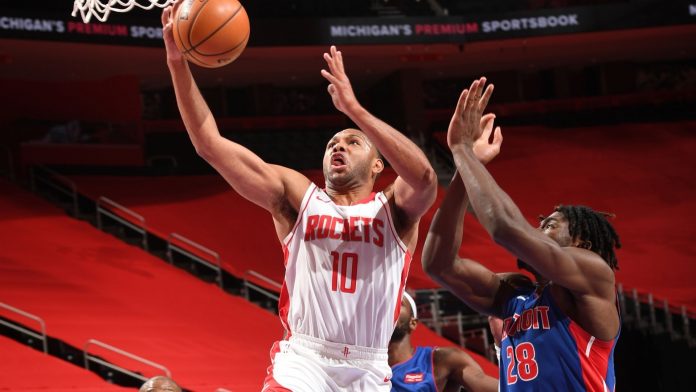 It’s been a rough year if you’re a Houston Rockets fan and it seems to be getting worse as the season progresses. Houston, who has dropped nine straight games, will try and get back on track during this rebuilding year when they visit the Toronto Raptors in Tampa, Florida. The Rockets traded superstar Russell Westbrook to Washington on the eve of the season for John Wall and dealt James Harden to Brooklyn last month for several future first-round picks plus guard Victor Oladipo. However, Oladipo has been battling injuries and could be dealt before the March 25 trade deadline as well. Earlier this week, the team released former All-Star center DeMarcus Cousins. Houston probably could have received a second round pick for him, but decided to release him instead in a surprise move. The Rockets are coming off a 112-96 home loss to the lowly Cleveland Cavaliers on Wednesday and have only covered the spread once during the losing skid. The Raptors have dropped two in a row after a 116-108 setback at the Miami Heat on Tuesday. Toronto had been on a four-game winning streak prior that included two wins in Milwaukee and a home victory over East-leading Philadelphia. Since sweeping the series in the 2017-18 season, Toronto has lost the past three against Houston including a 119-109 Rockets home win last season. Harden had 23 points, and Westbrook 19 points in that one. Pascal Siakam had 24 points and nine rebounds in a losing effort, and Kyle Lowry 19 points and eight assists.

At this point, it sure looks like Houston is tanking in order to improve its NBA Draft lottery position. Oladipo was back Wednesday after missing nearly two weeks with a foot injury and had 17 points and six assists. Wall had 20 points and is one of the few bright spots for Houston this season. PJ Tucker had zero points in 31 minutes and he’s also on the trading block. The Rockets rank near the bottom in almost every offensive category including points (108.6), field goal percentage (44.4), three-point shooting (33.9) and even free-throws (75.0). Houston is looking to tie its longest-ever winning streak vs. the Raptors with a fourth straight win in the series. The Rockets have won four of their past five on road vs. Toronto after losing 14 of the previous 19, but none of those were in Tampa. Houston will return home on Sunday to face the Memphis Grizzlies.

Lowry returned from a four-game injury absence on Wednesday, but it wasn’t enough to lift the Raptors past the Heat. It was the fifth game in seven days for the Raptors and their 12th in 20 days. Lowry looked good with 24 points, eight assists and seven rebounds. Fred VanVleet also had 24 points, but Siakam got into foul trouble and finished with just five points on 1-for-6 shooting. His career-high streak of six straight games with at least five assists also ended. The All-Star reserves were announced earlier this week, and for the first time since the 2012-13 season the Raptors will not have at least one player on the team. The Raptors will host the Chicago Bulls on Sunday.

This seems like a lot of points to lay, but the Rockets are awful right now. Toronto is starting to play much better and they’re on a 7-1 ATS run when playing on one-day rest.