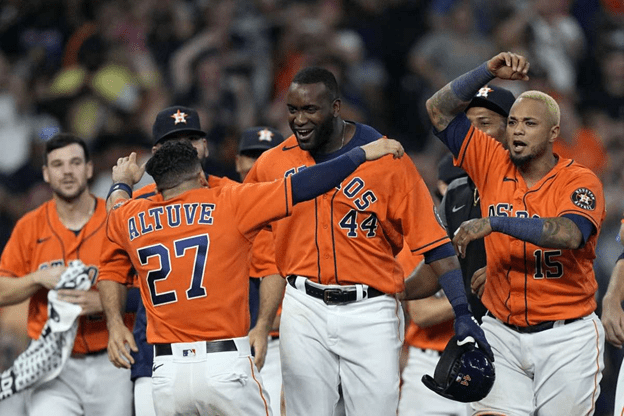 The Boston Red Sox were six outs away from taking a 3-1 series lead back in Game 4, but now find themselves in a hole entering Game 6 on Friday. The Houston Astros rallied in Game 4 at Fenway Park and piled on the runs for a 9-2 victory then went out in Game 5 and breezed to a 9-1 triumph to take a 3-2 series lead. They now have two chances at Minute Maid Park to punch their ticket to the World Series next week. It wasn’t just the offense that spurred on Houston’s Game 5 victory, it was a much-needed strong outing from a starting pitcher. Framber Valdez went an unexpected eight strong innings to give the bullpen a break heading into the off day on Thursday. At age 27, Valdez became the youngest starter to log eight or more innings while allowing one run or none in a postseason starts since Madison Bumgarner in 2016.

After totaling five hits in Game 4 Tuesday, the Red Sox finished with just three on Wednesday after recording 22 hits and outscoring Houston 21-8 while winning Games 2 and 3. Meanwhile, the Astros have totaled 18 runs on 23 hits over the last two games. The Red Sox will send Nathan Eovaldi to the mound on Friday against fellow right-hander Luis Garcia.

Eovaldi has faced Houston twice this series – once in relief – and not fared well. He started Game 2 in which Boston won 9-5, but the 31-year-old allowed five hits and three runs in 5 1/3 innings. On Tuesday, Eovaldi came on in relief and allowed two hits, two walks and four runs while recording just two outs. Kevin Plawecki will catch Eovaldi in Game 6.

Garcia has been hit pretty hard in two playoff starts this year. He allowed five runs and five hits to the White Sox in the ALDS then last just one inning on Friday before exiting with discomfort in his right knee. Prior to his departure in the second inning, he surrendered a grand slam in the first.

The over has cashed in all five games so far in this series and seven in row dating back to the regular season. Pitching has struggled for both teams and this has the feel of another slugfest.