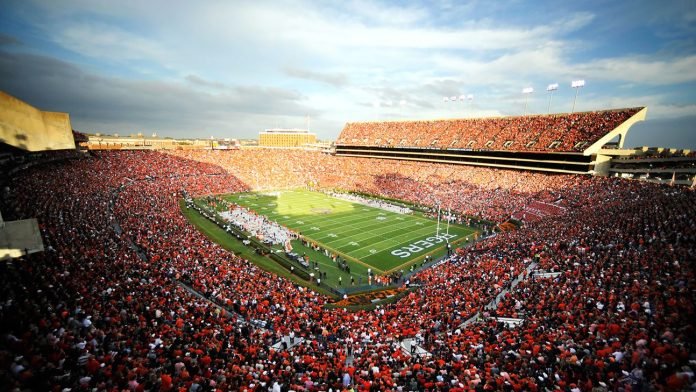 It’s the Big Ten vs. SEC this coming Saturday, as the Auburn Tigers host the 22nd-ranked Penn State Nittany Lions at Jordan-Hare Stadium. Last year in State College, the Penn State faithful all dressed up in white to help their Lions beat Auburn 28-20. Now, the Tigers are asking their fans to wear orange, as a crowd of 80,000 is expected for this rematch. Last year’s loss still stings for Auburn, who very easily could have won. Both teams are off to 2-0 starts, but the Tigers struggled last week in a 24-16 win over San Jose State. They were actually trailing 10-7 at halftime, a week after a 42-16 win over Mercer. Auburn has lost its last three games to the Big Ten, including bowl losses to Northwestern and Minnesota.

Penn State has already survived a tough road atmosphere when they won 35-31 at Purdue to start the season in a game the Boilermakers basically gave away. The Nittany Lions then were able to easily beat Ohio 46-10 in their home opener last week to climb back into the Top 25 in the AP Poll. Penn State’s defense has held their first two opponents to just 86.5 yards rushing a game, but will be severely tested against an Auburn rush attack that is one of the best in the country right now. The Tigers rank 14th with 247.5 yards a game on the ground through the first two weeks. Penn State has not fared well against the SEC, losing six of the last seven with the lone win obviously coming last year against the Tigers.

Penn State’s secondary has been outstanding so far led by Keaton Ellis and Joey Porter Jr., but it’s Auburn’s rushing attack that will be the focus. Linebacker Curtis Jacobs is Penn State’s leading tackler with 11, with Ji’Avir Brown next (10 tackles). Johnny Dixon has two of the Nittany Lions’ three sacks. Penn State’s own rushing game has been solid thus far thanks to Nicholas Singleton. The freshman already has 210 rushing yards on just 20 carries. Quarterback Sean Clifford had three touchdown passes and three interceptions in two games against the SEC last year, but is off to a good start in 2022. Clifford has thrown for 495 yards with five touchdown passes and one interception and has ran in two scores. Mitchell Tinsley is the top receiver with 111 yards on 10 catches.

Auburn’s rushing attack begins with Tank Bigsby, who has gained 198 yards and three touchdowns on 29 carries through two games. Bigsby had just 51 yards on 13 carries last week in the win over San Jose State. Auburn has eight scoring runs in the first two games with Jarquez Hunter recording four on just 16 rushing attempts. The main concern with Auburn’s offense is at quarterback. With Bo Nix transferring to Oregon, T.J. Finley takes over and is off to a slow start. Finley has just 279 passing yards, one touchdown pass, and three interceptions in the first two games. Freshman backup Robby Ashford also has an interception, although he has run for 129 yards. Auburn is minus four in turnover margin already, which is a concern. Linebacker Cam Riley came into the season with 23 career tackles, but has 21 already this year. This is the first time Auburn is an underdog at home against a non-conference team since 2016.

Auburn’s passing attack and turnover rate is a concern so far this season considering the teams they’ve played aren’t very good. Penn State will focus on the run and do their best to slow it down. The Lions also have already played in a tough road atmosphere this season and survived. I’ll lay the points.