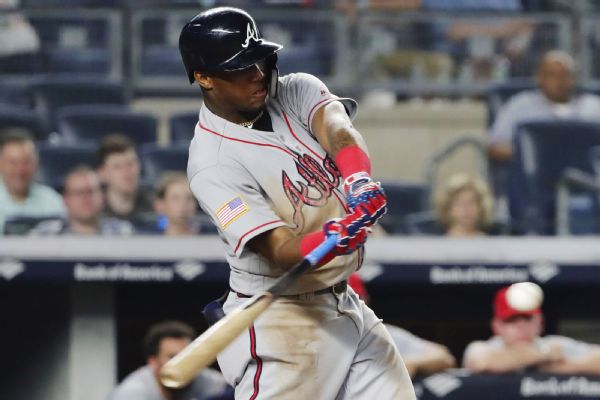 The San Diego Padres have been one of the pleasant surprises in baseball as we head into May, and are using their very young talent to keep pace with the Los Angeles Dodgers in the NL West. They will host the first place Dodgers this coming weekend but have to first play two more games on their seven-game road trip including Wednesday night’s showdown in Atlanta. The teams have split the first two games of their four-game set with San Diego getting another strong outing from rookie right-hander Chris Paddack in the 4-3 win on Tuesday. The Padres had to place rookie shortstop Fernando Tatis, Jr. on the Injured List after Sunday’s game when he pulled a hamstring, but another young bat stepped up in Tuesday’s victory. Right fielder Franmil Reyes clubbed two home runs and an RBI double to back Paddack and now leads the team with eight on the season. Atlanta, which fell back below .500, lost for the ninth time in its past 14 games and have their own injury concerns as third baseman Josh Donaldson (right calf strain) did not play and center fielder Ender Inciarte (right hamstring tightness) did not start. Left fielder Matt Joyce got a rare start and came through with two hits and two RBIs, while right fielder Nick Markakis extended his hitting streak to seven games and leads Atlanta with a .330 batting average. Tuesday’s victory was just San Diego’s second in its past 13 games at Atlanta dating back to 2016.

Cal Quantrill is just another in the line of top prospects San Diego is rolling out and will make his major league debut against Atlanta on Wednesday. Quantrill was the top pick in the 2016 draft and made five starts at Triple-A El Paso and posted a 2.86 ERA in his past four outings after getting rocked for six earned runs (eight total) in his first start. Quantrill went 9-6 with a 4.80 ERA in 28 starts between Double-A San Antonio and El Paso last season.

Max Fried is coming off his worst outing of the season after two home runs ultimately did him in, but did manage to strike out a season-high eight batters in an 8-4 loss to Colorado. Fried gave up four runs on seven hits with no walks in 5.1 innings to suffer his first loss of 2019. He allowed two earned runs or fewer in his first four starts, walking more than one hitter just once while posting a 1.085 WHIP. Fried has a 4.08 ERA in three home starts this season.

Atlanta isn’t playing that well yet, but they do have the pitching edge in this one tonight after having to face Paddack. Quantrill could be good some day, but I don’t see him shutting down the Braves lineup tonight. Fried should have no issues taking care of one of the worst offenses in the league.

Check out who Bobby Babowski has on his Free MLB Picks page for Wednesday. He is 48-35 on the season after a perfect 2-0 Tuesday!