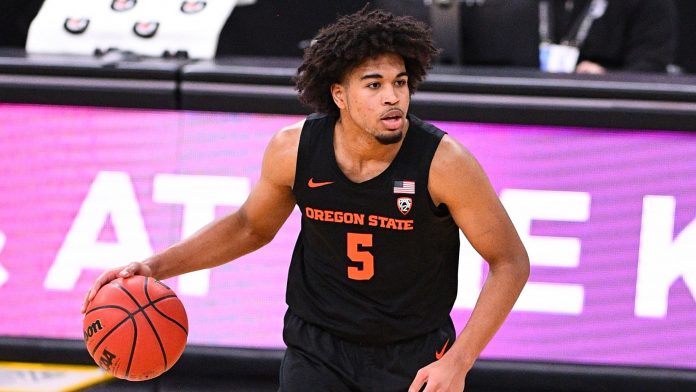 On March 11, the Oregon State Beavers needed to rally in a Pac-12 quarterfinal tournament game just to save their season. They have not stopped winning since and are now one win away from reaching the Final Four as a 12-seed in this year’s NCAA Tournament. Standing in their way are the second-seeded Houston Cougars in the Midwest Regional final set for Monday night at Lucas Oil Stadium in Indianapolis. Oregon State is coming off a 65-58 win over eighth-seeded Loyola Chicago on Saturday in the first Midwest Region semifinal. The Beavers have eliminated three higher-seeded teams since claiming an automatic bid in the NCAA Tournament by winning the Pac-12 Tournament. A win over Houston on Monday would earn Oregon State its first Final Four since 1963. Houston has waited almost 40 years since earning three-straight trips to the Final Four from 1982-84. The Cougars rolled to a 62-46 victory over upstart and 11th-seeded Syracuse in the second Midwest Region semifinal. Houston has benefited from a fortunate draw, with the Beavers being the fourth double-digit seed it will face during this NCAA Tournament run. The Cougars come into Monday on a 10-game win streak dating back to February 3, and are 15-5 against the spread (ATS) over their last 20. The Beavers are on a six-game run of their own, both straight up and ATS. Oddsmakers have Houston as an 8-point favorite with the total set at 129.

Oregon State’s defense has been a big factor in their tournament run, as they held Loyola to 58 total points and five made three’s in the Sweet 16. The Beavers are giving up an average of just 21 first-half points during March Madness, and have led by at least eight points at the half during tournament wins against Loyola, No. 5 Tennessee, and No. 4 Oklahoma State. Guard Ethan Thompson scored a game-high 22 against Loyola for his second straight 20-point outing. Thompson is averaging 20.3 points and seven rebounds per game in this tournament. Junior forward Warith Alatishe scored 10 points and grabbed 11 boards on Saturday for his first double-double of the tournament. Oregon State has allowed its past three opponents to shoot just 31.3 percent from the floor. The Beavers are 9-1 straight up and 9-1 against the spread over their last 10 games.

Houston held the Orange to 46 total points and 28 percent shooting, also out-rebounding them 40-31. The Cougars have out-rebounded all of their March Madness opponents by at least 10. Forward Justin Gorham led the way on Saturday with 13 points and 10 boards, while senior DeJon Jarreau not only kept Buddy Boeheim in check, but scored nine points himself while collecting eight rebounds and eight assists. Team leading scorer Quentin Grimes had a game-high 14 points and also knocked down four 3-pointers in the win. The Cougars are second in the nation with just 57.5 points allowed per game and first in opponents’ field goal percentage (37.0). Houston is 7-3 against the spread in its last 10 games overall.

We know Houston has one of the best – if not the best – defenses in the country. Oregon State’s run in this tournament has been all about defense. Neither team is very dynamic offensively and the pressure is starting to mount. I think that causes this game to go under the posted total.