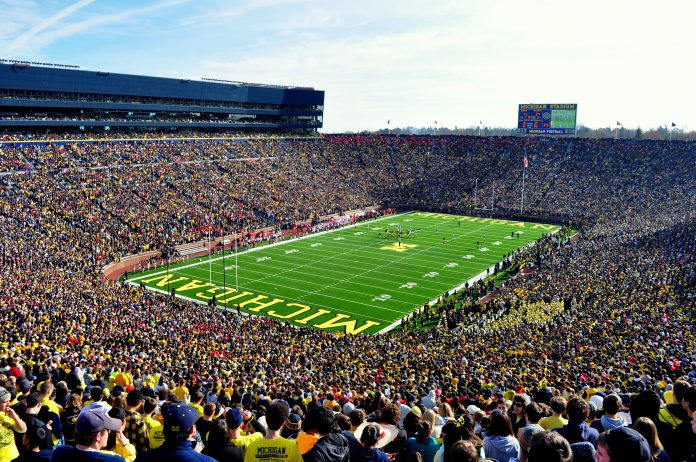 All eyes will be on Michigan Stadium on Saturday afternoon as the Big Ten’s biggest game of the year is set to kick off. Ohio State vs. Michigan is considered one of the best rivalries in all of sports and this year’s edition has everything on the line. The winner will not only win the Big Ten East Division and go to the conference championship game next week, but they’ll also be alive for the College Football Playoffs. The Buckeyes have won nine-straight games since losing at home to Oregon in September and have looked awfully impressive in doing so. They are coming off an easy 56-7 win over Michigan State at home by scoring on their first seven possessions before taking their foot off the gas. Quarterback C.J. Stroud is now one of the favorites to win the Heisman Trophy after his performance against Michigan State. The Buckeyes lead the nation in scoring (47.2 ppg), total offense (559.9 ypg) and touchdowns (67).

Michigan is also coming off an easy win – 59-18 at Maryland – after a hard-fought victory at Penn State a week earlier. Michigan’s only loss was to rival Michigan State on Oct. 30 and the defense has clamped down since. The Wolverines are seventh in scoring defense (16.3 ppg), eighth in pass defense (178.4 ypg) and ninth in total defense (306.6 ypg) for the season. Ohio State has dominated this series over the last couple of decades and are seeking their ninth win in a row against Michigan. The teams didn’t play last year because of a COVID-19 outbreak in the Wolverines’ program. The Buckeyes have won 18 of the last 20 meetings including a 56-27 triumph in 2019 in Ann Arbor.

Stroud was almost perfect last Saturday against Michigan State, completing 32-of-35 passes for 432 passing yards and six touchdowns with zero interceptions. He threw all six TDs in the first-half while setting a school record with 17 straight completions. He has some great weapons to throw to including Garrett Wilson, Chris Olave and Jaxon Smith-Njigba, who have combined for 187 catches for 2,919 yards and 30 touchdowns on the season. Ohio State also ran the ball for 206 yards and two touchdowns on 43 total carries versus the Spartans. On the season, TreVeyon Henderson has rushed for 1,019 yards and 14 scores. The defense held Michigan State to only 5-of-16 on third downs and just 224 total yards from scrimmage. The Buckeyes are 11th against the run (102.3 ypg) and are also tied for ninth with 36 sacks.

The Wolverines’ defense has been solid since the loss to Sparty, allowing an average of just 14 points in the last three games. The unit is led by two of the nation’s best pass rushers in Aidan Hutchinson (nine sacks) and David Ojabo (10 sacks). Michigan State didn’t get much going on the ground against the Buckeyes last week but the Wolverines present a much bigger challenge. The Wolverines rank 15th in the country with 218.4 rushing yards per game. Last week against Maryland, Michigan ran it 35 times for 151 yards and three touchdowns. Michigan is 5-1 against the spread in its last six games at home.

This line keeps going up with all the public money taking the Buckeyes’ side. I’ll go the other way with Michigan. They certainly have the defense to keep Ohio State in check. The Buckeyes won’t be able to score at-will like they did last week. I can see a low-scoring game, so I’ll take the points and pray.