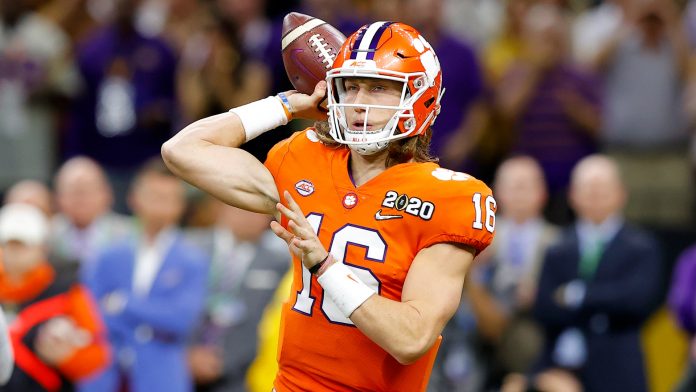 While the first College Football Playoff semifinal game appears to be a no-contest between Notre Dame and Alabama, the nightcap figures to be a little closer. The undefeated Ohio State Buckeyes once again will play the Clemson Tigers for a chance at going to the National Championship. The Buckeyes have waited a year to get the bad taste out of their mouth from losing 29-23 to Clemson. Ohio State led 16-0 before Clemson quarterback Trevor Lawrence led the comeback. Justin Fields was intercepted in the end zone by Nolan Turner with 37 seconds left in the game to seal the victory for Clemson, who went on to lose to LSU in the title game. The Tigers won the CFP title in 2016 following a 31-0 rout of the Buckeyes in the semifinal and are 4-0 all-time in the series. Ohio State managed to play only six games this season and are coming off a 22-10 win over Northwestern in the Big Ten title game. The Buckeyes had 22 players out for the game, mostly because of COVID-19 issues, but most if not all should be ready to go on Jan. 1. Lawrence tested positive earlier this season and missed a few games but appears in top form now. The likely No. 1 NFL Draft pick threw for 322 yards and two touchdowns as Clemson downed Notre Dame 34-10 to win the ACC championship.

The Tigers are 7.5-point favorites in this semifinal game with a total of 66. Early look-ahead lines if Alabama were to beat Notre Dame are the Tide around -10 vs. Ohio State and -4 vs. Clemson. It’s extremely rare for Ohio State to be this much of an underdog. It hasn’t happened in a regular-season game since 2011 at Michigan and last occurred on New Year’s Day 2015. The Buckeyes were the No. 4 seed and were +7.5 vs. No. 1 Alabama, also in the Sugar Bowl. Ohio State won that and then knocked off No. 2 Oregon to win its last national championship. Last year’s loss to Clemson was coach Ryan Day’s only loss so far with the Buckeyes. Lawrence and running back Travis Etienne carried the load. Lawrence had 259 passing yards and a touchdown, plus 107 yards and a score on the ground while Etienne had 134 all-purpose yards and three TDs.

The Buckeyes had games vs. Maryland, Illinois and Michigan cancelled, but the Big Ten altered the rule of having to play at least six games to qualify for the conference championship game. That helped Ohio State land a spot in the CFP. Quarterback Justin Fields was dealing with an injured thumb in the win over Northwestern and missing top wideout Chris Olave due to COVID-19 protocols. Fields completed just 12-of-27 for 114 yards and two picks against a solid Wildcats defense. Oklahoma transfer running back Trey Sermon carried the load vs. Northwestern, running for 331 yards and two scores on 29 carries – a school record. Ohio State’s ground attack had success versus the Tigers last year, as JK Dobbins and company had 196 rushing yards and a touchdown. Ohio State ranks seventh in the country in stopping the run (96.7), but 104th against the pass (260.8).

Clemson did lose a game in double overtime this year at Notre Dame, but Lawrence was out due to COVID-19. Not only did he have a great game through the air against Notre Dame in the ACC title game, but he also rushed for 90 yards and a score, which is something Ohio State’s defense needs to account for. Like Lawrence, Etienne is up for several major awards, and has accounted for 15 touchdowns this season and is the only running back in the nation with over 500 receiving yards. He is already the ACC’s all-time leader in rushing and career touchdowns. Clemson’s offense ranks fourth nationally in scoring at 44.9 points per contest, while allowing only 17.5. Clemson is 6-0 ATS in its past six games as a neutral-site favorite and 3-0 ATS in its last three games overall.

Ohio State has a ton of motivation to win this game, but do they have enough defense to slow down Lawrence and company? No. Clemson should have their way on offense and there’s still some question about Fields’ thumb, which obviously effected him in the last game. I’ll lay the points.