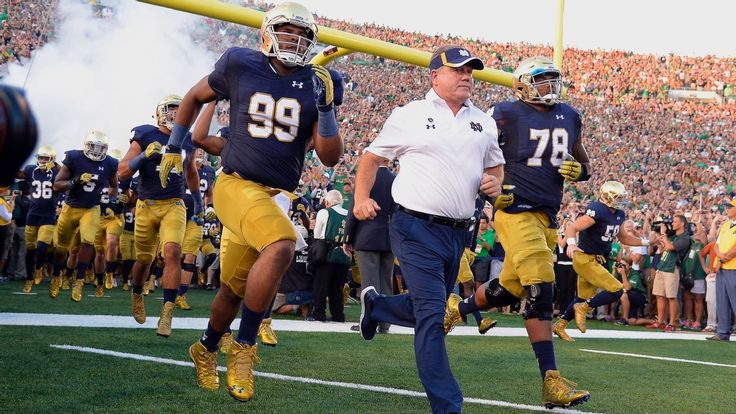 The Notre Dame Fighting Irish will try and avoid a letdown after a huge victory last week when they visit the Boston College Eagles on Saturday afternoon in Chestnut Hill, Mass. The Irish will look to continue its perfect start to the season after a wild 47-40 double-overtime win over then-No. 1 Clemson in South Bend last week. Notre Dame drove 91 yards in the final two minutes to force overtime, then held off the Tigers to mark the program’s first victory against a No. 1-ranked opponent since 1993. Boston College is coming off a 16-13 road win over Syracuse, after a 34-28 setback at Clemson one week earlier. The Eagles are seeking back-to-back wins for the first time since the first two games of the season back in September. Eagles quarterback Phil Jurkovec started his college career at Notre Dame before transferring to Boston College, in part because he could not beat out Ian Book on the depth chart.

Notre Dame was fortunate last week that Trevor Lawrence was not around for Clemson last week, or the result could have been different. D.J. Uiagalelei played well in place of Lawrence, but the Irish still played well enough to beat anyone that day. Ian Book passed for 310 yards and a touchdown on 22-of-39 against Clemson, while the ground attack of Notre Dame came up big with 208 rushing yards and three touchdowns on 40 carries. Book has passed for 1,535 yards, eight touchdowns and one interception this season, while also rushing for five more scores. Kyren Williams leads the Irish with 740 rushing yards to go with 10 touchdowns. Notre Dame’s defense ranks 10th overall (296.6) and third against the run (85.1). Linemen Isaiah Foskey and Adetokunbo Ogundeji each have 3.5 sacks to lead Notre Dame, and four defenders have one interception apiece. The Irish will get a week off before playing at North Carolina on Nov. 27.

The Boston College defense came up big last week, allowing 240 total yards to Syracuse, but Notre Dame will prove to be a much tougher task. The Eagles wouldn’t let the Orange run the ball at all. Syracuse recorded just 52 yards on 21 carries for an average of 2.5 yards per rushing attempt. It was the first time since the season opener that Boston College has allowed less than 21 points. They stand 40th in the country in points allowed at 24.6 per contest. Boston College is great in covering the spread when playing at home, going 3-0 ATS in their last three games in Chestnut Hill. Jurkovec has passed for 2,083 yards, 15 touchdowns and four interceptions on the season. His top target has been wideout Zay Flowers, who has 38 catches for 600 yards and six touchdowns. The running game is led by David Bailey, who has 429 yards and four scores. The Eagles will host Louisville in two weeks.

This is a great spot to take Boston College here. Yes, Notre Dame is better and should win by 20+, but there has to be some sort of letdown after that win over Clemson last week. B.C. played Clemson pretty tough on the road and the homefield advantage should help them here. I’ll take the points.