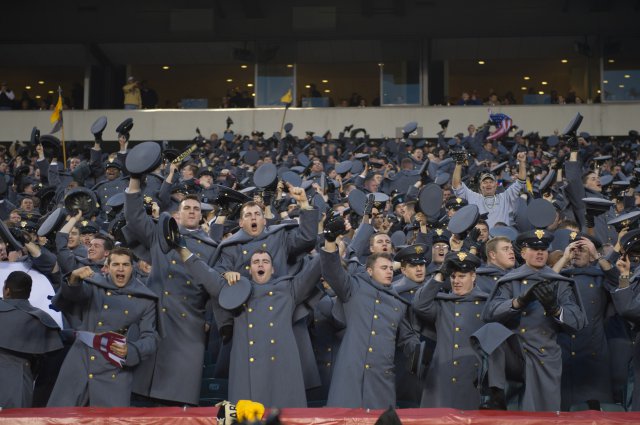 One of my favorite classic rivalries in all of sports takes place every December from either Philadelphia or Baltimore, when the Navy Midshipmen and Army Black Knights clash on the football field for a year’s worth of bragging rights. This year’s game takes place in Philly and the tide is starting to turn in this series. Navy reeled off 14-straight victories until Army broke that streak two years ago and is looking for its third consecutive win in the series. Navy is going through its first losing season since 2011, while the Black Knights are ranked in the Top 25 for the first time since 1996 thanks to a ground attack that produces a nation’s second-best 303 yards per game (Georgia Tech 334.9) and an average time of possession of 39 minutes, 15 seconds, leading the country by a wide margin. The Midshipmen, who have lost 12 straight away from home, have the third-best rushing game in the country at 288.5 yards but the defense can’t seem to stop anyone right now. Saturday’s game, which is the 119th in this historic rivalry, will likely come down to who can stop the run. Army appears to have the edge there, ranking 12th in rush defense at 106.5 yards compared to Navy’s 89th-best unit (189.0). A victory Saturday by the Black Knights would give them back-to-back outright Commander-in-Chief’s trophies for the first time in Academy history. The teams had two common opponents this season in Hawaii and Air Force. The Black Knights defeated them 28-21 and 17-14 respectively, while the Midshipmen lost 59-41 and 35-7.

Navy can’t seem to find a No. 1 quarterback and have been using the trio of senior Zach Abey, junior Malcolm Perry, and senior Garret Lewis to no success. They have combined for just 866 yards passing, five touchdowns and three interceptions while competing 44.1 percent of their passes. Abey began the season at wide receiver after playing QB most of last season and is the goal-line specialist with 14 rushing touchdowns while Perry (1,035 yards, seven TDs) showed a spark in this game last year with a 68-yard TD run. The Midshipmen are ranked second in the country in fewest penalties (3.58) and penalty yardage (30 per game), marking the 10th time in 11 seasons they have finished first or second in those categories. Its not surprising they are very disciplined.

Army’s success with running the ball this season has mostly to do with an outstanding offensive line, but we know those players don’t get the praise. That would go to senior running back Darnell Woolfork (823 yards, 14 touchdowns) and junior quarterback Kelvin Hopkins Jr. (783 yards, 10 TDs). Hopkins has also thrown for 895 yards with six TDs and three interceptions, adding some balance to a team that passed for only 361 yards with two TDs and six interceptions last season.

Its clear that Army is the better team, but we know you can throw just about everything out the window when these two meet. The games have been pretty close recently, with the exception of a few Navy blowouts. The Midshipmen have been playing better lately and the Black Knights don’t tend to blow opponents out. I say Navy steps it up here and keeps it close.