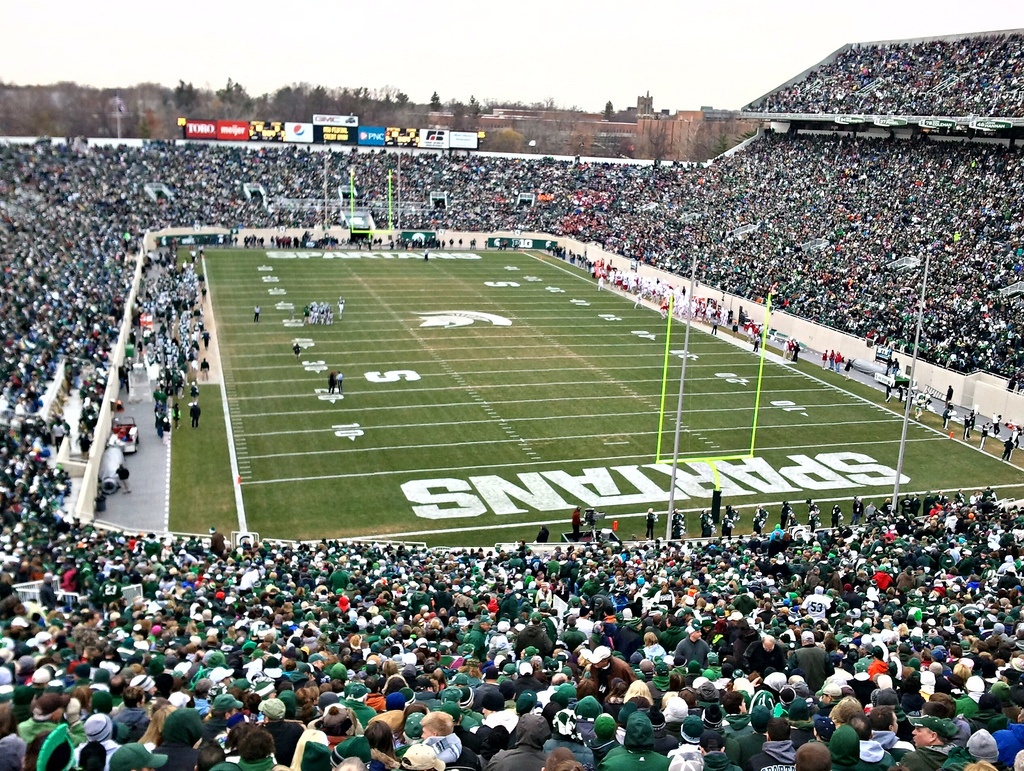 It’s been a long time since the Michigan Wolverines and Michigan State Spartans have met with so much on the line for both teams. Their annual showdown takes place this Saturday from East Lansing with both teams ranked in the top 10 coming in for the first time since 1964. Neither team was expected to legitimately compete with Ohio State in the Big Ten East but one of those squads will leave Spartan Stadium with a perfect 8-0 record and first place in the standings. This game also has huge playoff implications and each will play Ohio State later this year. These teams are also a combined 11-1-2 against the spread, proving oddsmakers wrong all season. The Wolverines have been doing it with defense, holding all but one opponent to 17 points or less. Michigan cruised to an easy 33-7 home win vs. Northwestern last week, just covering the 23.5-point spread.

The Spartans have the luxury of resting last week after a hard-fought 20-15 win at Indiana on Oct. 16. Michigan State’s defense is allowing just 18.7 points a game compared to Michigan’s 14.3, but the Spartans are surrendering over 100 yards of total offense more than the Wolverines. Michigan is seeing all the love from the public betting community so far. The line opened at -1 in favor of the Wolverines and has been bet all the way up to 4 as of Thursday afternoon with a total of 50.5. Michigan State shocked the world last year with a 27-24 win in Ann Arbor as 21.5-point underdogs. The road team has actually won five of the last six meetings.

Michigan had an easy tune-up for this week’s game and cruised over the outmatched Wildcats at Michigan Stadium. The Wolverines did most of their damage on the ground, getting 119 rushing yards and two touchdowns from Blake Corum and 110 yards and a pair of rushing scores from Hassan Haskins. Michigan’s ground attack is No. 1 in the Big Ten conference with an average of 253.29 rushing yards per game. Corum leads the team with 729 yards on 116 carries, while Haskins has 602 yards on 124 carries. Together, they have combined for 20 rushing touchdowns. Starting quarterback, Cade McNamara, is averaging 159.3 passing yards per game but he’s thrown just one interception. The Wolverines, who are second nationally with 14.3 points allowed per game, are 5-2 against the spread in their last seven games away from home.

This will be Michigan State’s first home game since defeating Western Kentucky 48-31 on Oct. 2. Since then, the Spartans have earned road victories at Rutgers and Indiana before their bye week. In the win over Indiana, quarterback Payton Thorne tossed two interceptions while the rushing attack averaged just 2.9 yards per carry. Running back Kenneth Walker III ranks second nationally with 997 yards on 152 carries and has 10 total touchdowns (nine rushing). Thorne is averaging 243 passing yards per game and has thrown for 15 touchdowns, compared to four interceptions. The defense came up big in the win over the Hoosiers, forcing three turnovers and also recording three sacks. The Spartans lead the Big Ten with 26.0 sacks through seven games, but the Wolverines have allowed just three sacks all season.

The Spartans have owned the Wolverines recently in terms of cashing winning tickets. Michigan State has covered 11 of the last 13 meetings and five of six at home. These two teams are pretty evenly matched in my opinion, so I’ll take the home dog here. I expect this line to come back down closer to 3 by kickoff.