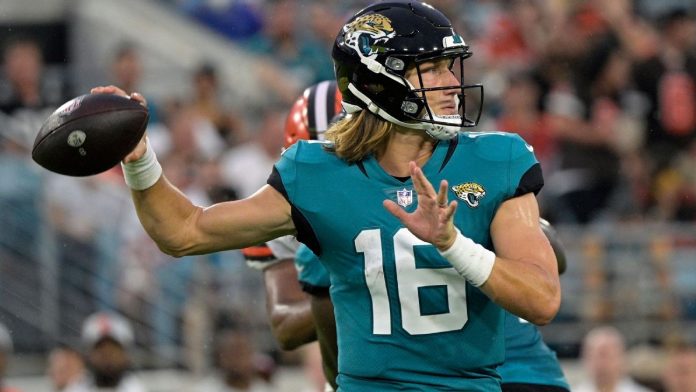 Monday Night Football is back! Yes, it might only be preseason, but Monday’s contest between the Jacksonville Jaguars and New Orleans Saints features a solid complement of quarterbacks. 2021 first-overall pick Trevor Lawrence will hopefully be leading the Jacksonville franchise for years to come, but backup Gardner Minshew is more than capable of running an offense. Lawrence and the Jags fell 23-13 at home to the Cleveland Browns in Week 1 – their 10th loss in a row dating back to last year’s regular season. The Saints have a pretty good QB competition between Taysom Hill and Jameis Winston. New Orleans is also coming off a loss – 17-14 at the Baltimore Ravens and are 4-point favorites in this one with a total of 39.5. The Saints have covered in six of their last seven against Jacksonville including a 24-20 win in the 2018 preseason.

The Jags played all four quarterbacks in last week’s loss to Cleveland. Lawrence (6-of-9, 71 yards) and Minshew (4-of-8, 47 yards) got the fewest reps. C.J. Beathard, who came over in free agency from the 49ers, led all Jaguars quarterbacks with 13 completions on 16 attempts for 102 yards and a touchdown. Jake Luton also threw a touchdown and completed 8-of-13 for 53 yards. Josh Hammond caught six balls for 52 yards while veteran receiver Tavon Austin had four receptions for 52 yards and a score. Dare Ogunbowale led the rushing attack with 24 yards on eight carries. The Jaguars allowed the most passing yards of all teams in Week 1 (319), but held the Browns to just 41 yards on the ground.

In the Saints loss to the Ravens in Week 1, Hill started the game under center and finished with 81 yards on 8-of-12 passing. Winston was 7-of-12 for 96 yards with an interception and touchdown. Hill also threw a pick. Notre Dame rookie Ian Book led all QBs with 126 yards on 9-of-16 passing, but he also threw an interception. Tony Jones put forth an excellent showing at running back, rushing for 82 yards on just seven attempts while also catching five passes for 38 yards. The Saints defense was gashed for 149 ground yards by the Ravens , but Bryce Thompson came up with an interception.

I like the Saints’ quarterback rotation for Monday’s game. Book, who didn’t play well in the second half, will be replace by Trevor Siemian as the No. 3 QB versus the Jaguars. That gives the Saints three veteran signal callers against a team that is still rebuilding. I’ll lay the points in this one.