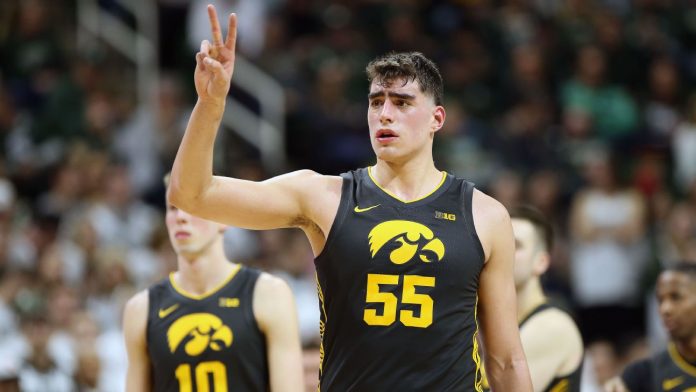 Two ranked Big Ten teams will battle on Friday with not a lot of momentum coming into this one as the Iowa Hawkeyes visit the Illinois Fighting Illini in Champagne, Il. Iowa is ranked No. 7 in the country but haven’t played since an 81-69 upset home loss on Jan. 21 to Indiana. Superstar Luka Garza recorded 28 points and 12 rebounds, but Iowa shot just 26.5 percent after halftime. The loss dropped the Hawkeyes 1.5 games behind Michigan for first place in the Big Ten, while Illinois is hanging around – just two back. The Illini lost two home games in a row to Maryland and Ohio State before rebounding with a solid 79-65 over Penn State. Illinois drew assists on 18 of 26 field goals in that game and played with more intensity than it had displayed in weeks. This will be Illinois’ sixth home game in their last seven overall and they are 4-3-1 ATS in Champagne. This game on Friday will be the season’s only meeting between the teams. Illinois and Iowa split two matchups last season, each winning at home. Iowa has covered the spread in each of the last seven meetings and the total has gone over in four of those.

Garza is the favorite to win national player of the year honors and the 6’11” senior leads the Big Ten with an average of 26.9 points per game while adding 8.9 rebounds and blocking nearly two shots per game. Garza also shoots effectively, hitting 61 percent from the field and 75.5 percent at the foul line. Indiana ended Iowa’s five-game winning streak back on Jan. 21, as the Hawkeyes shot just 38.1 percent from the field – down from their 48.7 percent season average, which is 18th best in the country. Iowa is also averaging a nation’s second-best 90.7 points per game. The Hawkeyes’ offense ranks first overall in adjusted offensive efficiency with 124.4 points per 100 possessions. Iowa will host Michigan State on Tuesday.

Illinois has a big man of their own in seven-footer Kofi Cockburn, who is coming off a freshman season averaging 13.3 points and 8.8 rebounds per game. This season, he is scoring 17.4 points and grabbing 10.3 rebounds a night, while hitting 70.1 percent of his shots. The Illini also have a weapon in Ayo Dosunmu, whose average of 21.7 points per game ranks only behind Garza in the conference. Dosunmu is shooting 49 percent of his shots while grabbing 6.3 rebounds and 4.9 assists per game. Cockburn led the Illini versus Penn State with 21 points and 12 rebounds. The Fighting Illini is 11th in the nation with 82.9 points per game and 10th with a 39.7 3-point shooting percentage. Illinois, who is 6-4 against the spread in its last 10 games, will play at Indiana on Tuesday.

Iowa has been itching to get back onto the court since their loss to Indiana over a week ago and they will be ready. The Hawkeyes have been more consistent this season than Illinois and Iowa is 15-6 ATS in their last 21 games dating back to last season. Garza vs. Cockburn will be fun to watch, but the latter will end up finding foul trouble once again.