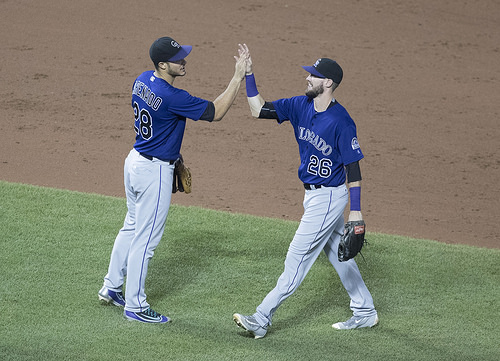 The Colorado Rockies look to continue their dominance over the San Francisco Giants when they open a four-game series on Thursday night at Coors Field in Denver. The Rockies, who have won six of the seven meetings this season with San Francisco, avoided being swept for the first time this year after salvaging the finale of a three-game set in Pittsburgh on Wednesday with a 5-1 victory. Trevor Story drove in a run for the third straight game in that win over Pittsburgh and looks to continue his offensive surge versus the Giants, against whom he has three homers, nine RBIs and six runs scored this season. Colorado swept the Giants in a series back in April by outscoring their NL West rivals 26-8. While Colorado is battling the Los Angeles Dodgers for first place in the division, the Giants rest in the cellar after losing 11 of their last 15 games. San Francisco ended a 1-4 homestand with a 7-2 setback to Kansas City on Wednesday, but have a couple of hitters who are doing their job. 3B-OF Eduardo Nunez has hit safely in 26 of his last 28 games while catcher Buster Posey has 21 hits in his last 14 games. Colorado begins the night tied with the Dodgers for the NL West lead, just trailing by percentage points.

Matt Moore, who has had a terrible season to date, didn’t fare well against Colorado in two starts earlier this season. He was hit for five runs on 10 hits in 5+ innings of a 5-0 setback on April 15th before being lit-up for six runs on nine hits – including three homers – in a 12-3 rout seven days later. Moore is 0-3 in his last five outings and is coming off a loss to the Twins on Friday, allowing four runs on seven hits in six innings. Moore has been at his worst on the road, posting an 0-4 mark with a 7.94 ERA in seven starts.

Colorado starter Jeff Hoffman is going in the opposite direction, allowing just one run in three straight starts four of the last five after Saturday’s 9-1 win over the Chicago Cubs. Hoffman recorded eight strikeouts versus the Cubs and has 34 total with just three walks in 27 innings this season. He pitched two innings of relief in his only encounter with the Giants, allowing three hits and a run.

I’ve been betting against Moore and the Giants all season and it’s paying off. I’m not going to change that here with Colorado at home and playing extremely well. I feel comfortable laying the 1.5 in this one.

CLICK HERE TO BET THE GIANTS VS ROCKIES GAME