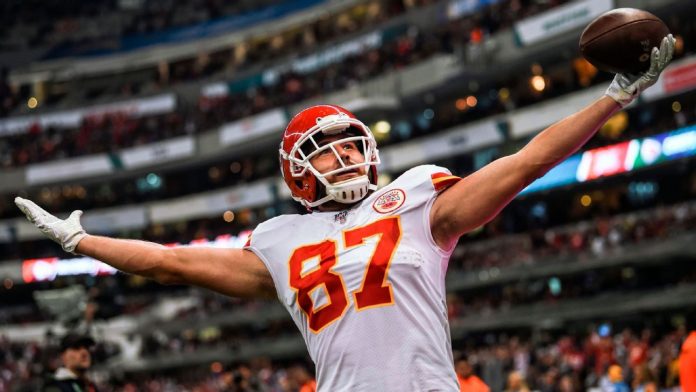 The NFL has begun flexing out Sunday night games with this week’s AFC West matchup between the Kansas City Chiefs and Los Angeles Chargers from SoFi Stadium in Inglewood. The NBC game was supposed to be the Bengals and Steelers. Instead, we get a great QB matchup featuring two of the best young stars Patrick Mahomes and Justin Herbert. The first meeting this season was a great one and was the first game featured on Amazon Prime’s Thursday night telecast back in Week 2. The Chiefs rallied for a 27-24 victory. With the game tied at 17 in the fourth quarter, Herbert was picked off at the Kansas City one-yard line, and it was returned 99 yards for a touchdown by rookie Jaylen Watson. Herbert, who injured his ribs during the game, threw for 334 yards and three scores, while Mahomes threw for 235 and two touchdowns.

The Chiefs come into L.A. as 5.5-point favorites with the total set at 52. Kansas City rides a three-game winning streak into Sunday’s contest after a 27-17 home win over the Jacksonville Jaguars last week. The Chiefs, who are 6-3 ATS on the season, now lead the AFC West by two games over the Chargers and could potentially put it away with a win on Sunday night. Los Angeles has struggled offensively in losing two of their last three games and dearly miss wideouts Keenan Allen and Mike Williams. Each could be back this week with Allen being the most likely. The Chargers are coming off a 22-16 loss to the San Francisco 49ers, but managed to cover the spread for the second straight week. L.A. is 4-1-1 ATS in the last six meetings with Kansas City.

Mahomes has taken over as the favorite to win his second NFL MVP award after his fourth-straight 300-yard passing game on Sunday. He threw for 331 yards and four scores on 26-of-35 passes, while also rushing seven times for 39 yards. Mahomes now owns the all-time record for passing touchdowns (176) through 75 career games. Kadarius Toney, acquired from the Giants before the trade deadline, had his first TD catch last week. He’ll have to be the man this Sunday after fellow wideout JuJu Smith-Schuster suffered a concussion and is ruled out for this week. In just two games with the Chiefs, Toney has 102 yards from scrimmage on eight touches. The Chiefs are 15-6-1 against the spread in their last 22 road games versus a team with a winning record at home. Kansas City will host the L.A. Rams next week.

The Chargers took a 16-10 lead over San Francisco last week, but were then shutout in the second half. Herbert went 21-for-35 for 196 yards with a touchdown and left briefly to be checked for a concussion but did return. Getting Allen and Williams back will be huge for this offense. Williams had 113 receiving yards and a touchdown on eight catches in the first meeting, while Allen missed that contest with a hamstring issue. The Chargers, who are averaging 22.2 points per game, are 1-3 ATS at home. Defensive tackles Christian Covington and Otito Ogbonnia suffered season-ending injuries in last week’s loss. The Chargers have battled injuries all season and finished last Sunday’s game with just three healthy defensive linemen. L.A. will play at the Arizona Cardinals next week.

The Chargers are a bit of a mess right now with all the injuries. The defense has been keeping them in games, but will have a hard time stopping the red-hot Mahomes. L.A. doesn’t play well at home and Chiefs fans might outnumber Charger fans. I think Kansas City rolls.