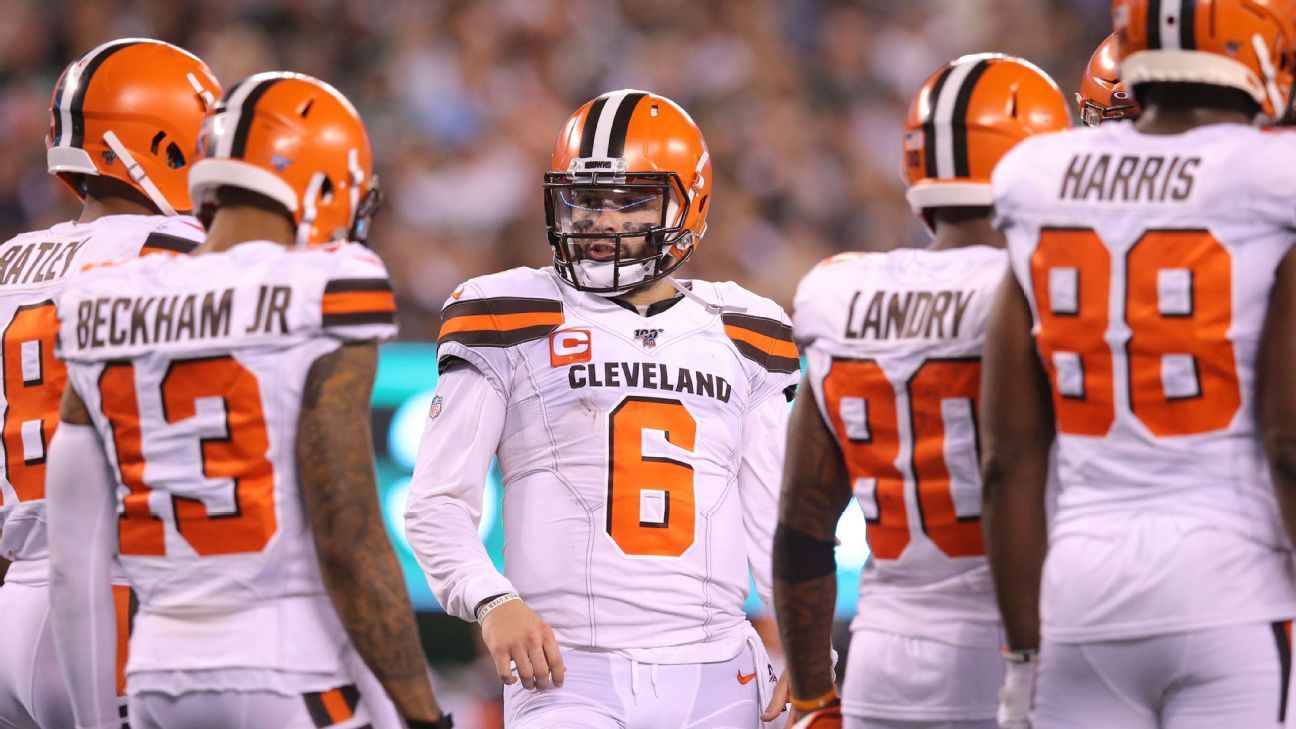 The best matchup in the Week 13 schedule in terms of overall records, has the Cleveland Browns visiting the Tennessee Titans on Sunday afternoon in Nashville. Cleveland is looking to keep their position as the No. 1 wild card, while the Titans look to keep their lead in the AFC South over the Indianapolis Colts. Despite an 8-3 record, the Browns have struggled the last two weeks with very close wins over the Philadelphia Eagles and Jacksonville Jaguars, two teams that have a combined record of 4-17-1. Cleveland’s rush defense has shown some holes recently and in their 22-17 victory two weeks ago against the Eagles, allowed 96 rushing yards in the first half. Last week, Jaguars rookie James Robinson recorded 128 yards in the Browns’ 27-25 win. The Titans exploded for 35 first-half points last week against the Colts and came away with a 45-26 victory that snapped the division tie. Running back Derrick Henry had three first-half touchdowns and 178 yards on 27 carries, while Ryan Tannehill threw for 221 yards and a score, improving his touchdown-interception ratio to 23-4. Tennessee allowed touchdowns on Indianapolis’ first two drives, but clamped down by not allowing the Colts to score again until the fourth quarter.

This game will feature Cleveland’s top-ranked rushing attack against Tennessee’s third-ranked attack and will also feature three running backs in the top 10 in the league – Nick Chubb, Kareem Hunt and Henry. The Browns lead the all-time series 35-32, but when they previously met in September of 2019 it was Tennessee that came out on top 43-13 in Cleveland. The Titans opened as 3.5-point favorites last week and that has moved up to 5.5 as of Thursday night with a total of 53.5. The Browns are 1-4 against the spread in their past five games as a road underdog, while the Titans are 2-5 ATS as a favorite in their last seven at home.

Cleveland’s rush defense will get some help this week with the return of stud pass-rusher Myles Garrett from the COVID-19/Reserve list, however, will still be without Pro Bowl cornerback Denzel Ward and their best safety Ronnie Harrison. Despite their recent woes against the run, the team still ranks ninth in the league in that category (108.2) but 20th defending the pass (246.7). On offense, Chubb is sixth in the league for total rushing yards and leads all RBs in average yards-per-carry at 6.3. Chubb had 144 rushing yards and a touchdown on 19 carries last week against Jacksonville, but was outperformed by one of his teammates. Wide receiver Jarvis Landry came up big with 143 receiving yards and a touchdown on eight receptions. The Browns have rushed for at least 200 yards in two of their last three games and for over 130 rushing yards in each of the last three. Quarterback Baker Mayfield tossed a pair of touchdowns in Jacksonville last Sunday and hasn’t thrown an interception since Oct. 25. The Browns will host Baltimore next Monday night.

Henry is the league’s leading rusher with 1,257 yards and 12 touchdowns, but it’s been Tannehill that has turned this offense around. He has 45 touchdowns to just nine interceptions since taking over starting QB duties in Week 3 of 2019 and has a couple of playmaking receivers in AJ Brown and Corey Davis. Tennessee might get wide receiver Adam Humphries back from a concussion that has sidelined him for four games. The defense has been an issue for the Titans despite the 8-3 record. They rank 25th overall at 384.1 yards a game and 28th against the pass (268.5). Tennessee has allowed 30 or more points on five occasions this season and are the worse third down unit, allowing first down conversions 52.6 percent of the time. The Titans, who are 3-2 ATS in their last five home games, will be at 1-10 Jacksonville next week.

Seven of Cleveland’s eight wins this season have come against teams with losing records and they barely got passed Philly and Jacksonville the last two weeks. Although Tennessee’s defense hasn’t been great, it should come up with enough stops to get the win and cover here.