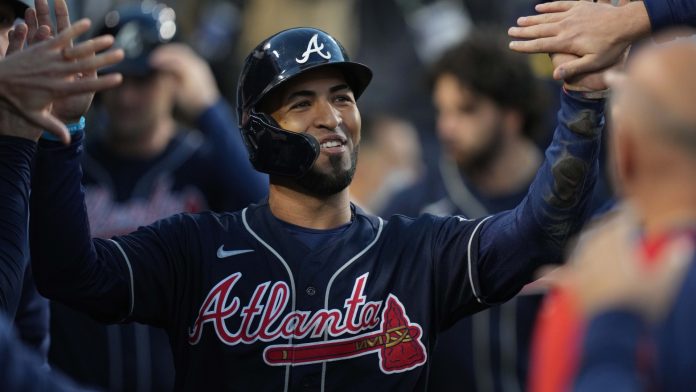 The Atlanta Braves and Houston Astros have split two easy wins entering Game 3 of the World Series. Now the series shifts to Truist Park outside of Atlanta for the next three nights. The Braves jumped out early in Game 1, chasing Houston starter Framber Valdez, and cruised to a 6-2 victory. The Astros got their revenge the next night by getting to Atlanta’s best pitcher, Max Fried for a 7-2 triumph. Jose Altuve went 2-for-5 with a double and a solo homer, his 22nd career HR in the postseason, tying him with Bernie Williams for second-most in playoff history behind Manny Ramirez (29). That came after he went hitless in five at-bats and struck out three times in Game 1. Michael Brantley went 2-for-4 with an RBI on Wednesday and is 5-for-9 in the series. The Braves were not the best home team during the regular season, going just 42-38 at Truist Park, but they are a perfect 5-0 this postseason. The last time Atlanta won a World Series home game was when they closed out the Cleveland Indians in Game 6 of the 1995 Fall Classic.

Houston will send out rookie Luis Garcia, who has struggled a bit this postseason. He is 1-1 with a 9.64 ERA in three starts, but his last one was promising. Garcia allowed just one hit in 5 2/3 innings in Houston’s ALCS-clinching win over the Boston Red Sox last Friday. He struck out seven and walked one in the 5-0 victory. On the road, Garcia is 5-3 with a 4.24 ERA and 1.34 WHIP in 76 1/3 innings.

The Braves will counter with right-hander Ian Anderson, who has been solid in the playoffs. In seven career postseason starts, Anderson is 3-0 with a 1.47 ERA, including 1-0 with a 2.25 ERA in three outings this year. He shut out the Brewers over five innings in the NLDS and allowed three runs over seven innings in two outings against the Dodgers in the NLCS. Anderson has struck out 36 in 30 1/3 career playoff innings and has surrendered just one homer.

As good as Anderson has been, this Astros lineup is still dangerous. I called for Houston to bounce back in Game 2 offensively, and they did. They should be able to keep it up in Atlanta no matter who’s pitching. Garcia has not been good on the road this year and Atlanta’s offense can be just as potent. I’ll keep taking the over.