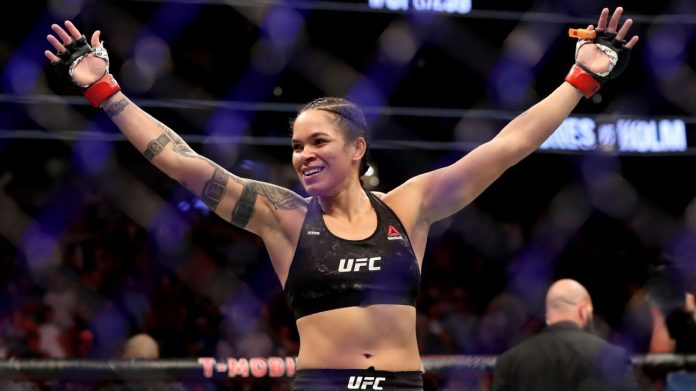 UFC 250 takes place this Saturday night from the organization’s Apex Facility in Las Vegas, Nevada with the main event featuring a battle between Felicia Spencer and Amanda Nunes. The odds are stacked against Spencer in this one with a $100 bet paying out $425 currently at Bovada Sportsbook.

Nunes (19-4) is both the UFC bantamweight and featherweight champion and could very well be the best all-around woman fighter ever in the UFC. She is a -650 favorite on the UFC odds board with Spencer (8-1) at +425. This was originally to be a co-main event of UFC 250 in Nunes’ native Brazil on May 9, but Nunes said she wasn’t fighting then because a lack of training due to the coronavirus.

Nunes hasn’t lost since September 2014 via third-round TKO against Cat Zingano. She took the bantamweight title as a +190 underdog vs. Miesha Tate at UFC 200 in July 2016. Nunes added the featherweight belt with an upset of Cris Cyborg in December 2018 with a first-round knockout.

Nunes wins by KO/TKO 68 percent of the time, while averaging 4.34 significant strikes per minute and 2.33 takedowns per 15 minutes. The odds of her winning by KO, TKO or disqualification are -130. She is looking to join Daniel Cormier and Henry Cejudo as the only UFC fighters ever to defend titles in two divisions.

Spencer is a black belt in Taekwondo and Brazilian Jiu-Jitsu and made her pro debut in September 2015 at Invicta FC. Spencer won that organization’s featherweight title with a fourth-round submission of Pam Sorenson in November 2018. She has gone 2-1 in the UFC with the only loss to Cyborg last July by unanimous decision in Edmonton.

She has won half her bouts by submission, two by KO/TKO and two by decision while averaging 4.54 significant strikes per minute and 1.36 takedowns per 15 minutes.

Here are more props for the main event from Bovada:

Prediction: I would be shocked if this fight went the distance. Nunes is one of the best ever and I knockout is very likely. Take Nunes to win by KO, TKO or DQ at -150.