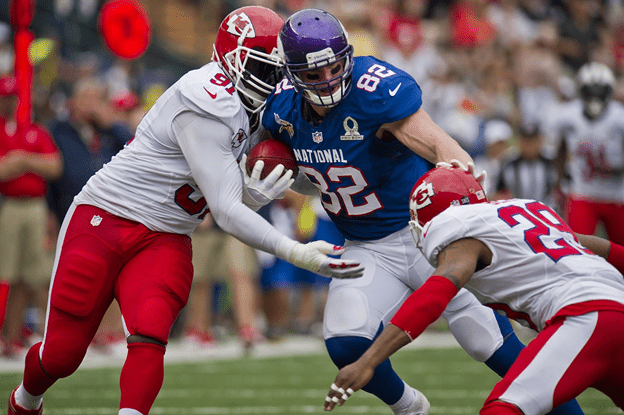 The first three playoff weeks of the 2020 NFL campaign have given the fans wild finishes and unexpected outcomes. There are many close calls, huge upsets, and even blowout victories happening in every game. Slowly, each group representing the AFC and NFC are taking their position to snatch the Lombardi trophy this year.

Now that the NFL is heading to it’s Week 4 Playoffs, the odds ranking this month has slightly changed, unlike in the previous months. As September month closes, some teams expectedly soared high, and some dogs are part of the leaderboard. With the current odds ranking, you will have some insights about who might have a clear future in the quest for Super Bowl LV.

Whether you are an avid football fan or dedicated bettor, you have the right to know who currently tops the leaderboard in today’s NFL game lines odd ranking. It will serve as your  basis on which team you should bet as the season progresses.

Here are the teams who nailed strong finishes in the first three matches.

The AFC is full of huge favorites in today’s NFL season, and Baltimore Ravens is one of them. During the opening game, the Ravens delighted the fans after burying the Browns into a 38-6 final score. After that game, they won over the Texans in Week 2.

Today, they will face the Chiefs, which can define their rank whether they stay on top or take one step down.

Last year’s Super Bowl champion has shown once again how they are tough this year. This team didn’t put too much effort into the drafting and retained their current player. The Chiefs opened the league, where they defeated the Texans immediately.

In Week 2, they also dominated the game against the Chargers. If they win in Week 3 against the Ravens, the Chiefs will climb back on top.

If you are looking for a team with the guts to hustle hard and could upset the big favorites, Seattle Seahawks are the group to count on. They remain undefeated in their first three matches, making their odds more impressive today. They first beat the Falcons in the opening game and the Pats in the second game.

In Week 3, the Cowboys couldn’t keep up and lost against this team.

Currently earning a 2-1 record, the San Francisco 49ers keep surviving on the road to Super Bowl LV. Last year, they reached the finals and faced the Chiefs yet settled as the runner up. Although the Niners are still considered as one of the underdogs, there is no doubt that they can step up and win in the upcoming matches.

The Packers are bouncing back this season. The team started strong with three winning streaks in the past three matches. Aaron Rodgers has done his homework of diagnosing excellent doses of defenses no matter where the games are held.

The Packers will face the Falcons in Week 4, and if they win, it can be a massive blowout for them this season.

Josh Allen had proved once again that the Buffalo Bills didn’t make the wrong move of drafting him as their quarterback in 2018. They are also an undefeated team in the AFC East as they won over the Jets, Dolphins, and Rams in the first three matches. As they approach the Week 4 Playoffs, they are going to contend with the Raiders.

The New England Patriots may have the biggest struggle this year because they need new talents in the group. After Cam Newton replaced Tom Brady as the main quarterback, it seems that the Pats are heading to the right path this year.

However, after they won over the Dolphins in the opening game, they were defeated by the Seahawks in Week 2. Fortunately, the team continued to bounce back in Week 3, winning against the Raiders.

During the opening game, Drew Brees had proven how veteran he is inside the football field after defeating this year’s big favorites, the Tampa Bay Buccaneers. However in Week 2 and 3, they struggled against the Raiders and the Packers, where they lost the game.

During the offseason, the Dallas Cowboys is one of the most dangerous teams to consider in the 2020 NFL season. But in the opening game, the Rams dispatched them to a 20-17 game run. In Week 2, they bounced back and won against the Falcons. In Week 3, the Seahawks remained tough and defeated them.

The Steelers’ aspirations to clinch the Super Bowl LV title this year are clearer than crystal. Ben Roethlisberger has played excellently in the first three games where they emerged victorious.

The trails are still long before the Super Bowl LV finals take place. Although the first three weeks are an excellent venue to consider where every NFL team currently stands, the biggest losers still have enough time to keep up. Will today’s top teams maintain their impressive lines to maintain their ranks, or  will their momentum will slow down in the coming weeks?