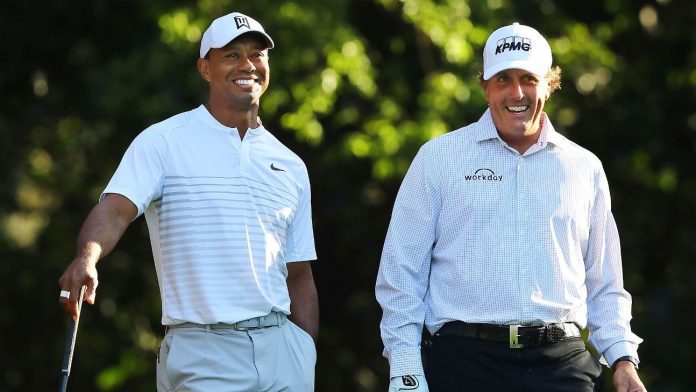 The last live golf competition on TV was March 12 – the first round of The Players Championship. It was canceled the next day, along with other tournaments that were scrapped or postponed because of the Coronavirius. This past Sunday marked golf’s return when Rory McIlroy and Dustin Johnson beat Rickie Fowler and Matthew Wolff in a skins game.

Next up is another exhibition match on May 24 down the road at Medalist Golf Club, where Tiger Woods plays when home. Woods and Peyton Manning will face Phil Mickelson and Tom Brady in a match billed as “Champions for Charity” that will raise $10 million for COVID-19 relief efforts.

The PGA Tour’s regular return is a just under month away and to help build the excitement for golf. The team match play follows a Four-Ball (Best Ball) format on the front nine, and is completed with a modified alternate shot format on the back nine where each golfer will tee off and then the team will play alternate shot from the selected drive. Hungry bettors can get in on the action over at Bovada Sportsbook.

Woods currently sits in 11th on world rankings whereas his opponent (Mickelson) missed the cut in four of his last six PGA events. Woods also has a home course advantage here, as he currently holds the course record at 62.

Manning also has an advantage over NFL rival Tom Brady. For one, he has had nothing but time to play golf since his retirement back in 2016, while Brady has been busy going to more Super Bowls. Manning also has an edge with a 6 handicap in comparison to Brady’s 8. Manning and Woods have also played together in 2005 at the Bay Hill Pro-Am and in 2009 at the Quail Hollow Championship.

Pick
As much as I like taking underdogs, I just can’t do it here. Even with all of his back problems, Woods can still compete with the aging Phil. Manning also has an advantage over Brady because he just simply has more time to play golf. I will lay the -225 and possibly play some props if they’re offered.