NFL What Is the Mac Jones’ Ceiling with the Patriots? 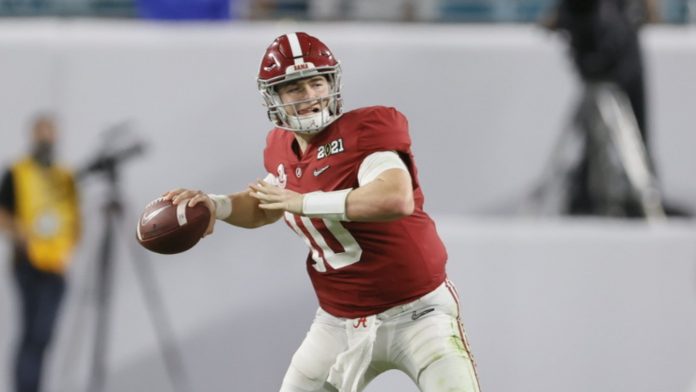 Quarterback Mac Jones was one of six Alabama players drafted in the first round of the NFL Draft, joining Devonta Smith, Jaylen Waddle, Alex Leatherwood, Patrick Surtain II and Najee Harris as members of that national title-winning squad to leave the board early.

The Crimson Tide are one of the premier football programs in the nation and they will be a dangerous unit again next year despite that exodus of talent. Coach Nick Saban has already said Jones’ job as starter will be handed to Bryce Young, a former five-star recruit out of high school and an early favourite for the 2022 Heisman Trophy.

With Young as a two-way threat under center, throwing to projected first-rounder John Metchie and protected by Evan Neal at left tackle, the post-draft American football odds sit ‘Bama early favorites at +300 to repeat as national champions.

Mac Projects as Potential Starter in 2021

Although surrounded by first-round talent, Jones put up eye-popping numbers by anyone’s standards in his time at Alabama. In his first full season as starter in 2020 he threw for 4,500 yards on a 77.4% completion rate with 41 touchdowns. Now the New England Patriots hope he can replicate that production in the NFL.

Coach Bill Belichick insists the Patriots plan to roll with Cam Newton as their starter in 2021 – whether that remains the case for the entire season is another matter. Newton was brought back for a second season in New England because he’s familiar with Belichick’s system, but his performances last season fell short of lofty expectations held by the Patriots fanbase.

Newton threw for 2,657 yards in 2020, with 8 touchdowns against 10 interceptions. Despite that inefficiency, he completed 65.8% of passes and ran for a further 592 yards and 12 touchdowns on the ground. However, he often went missing late in games and a costly final-drive fumble in a game against Buffalo doomed the Patriots to their first season missing the playoffs since 2008.

From ’Bama to the ’Boro.

First-round picks were once a source of premium talent for the Patriots, with Vince Wilfork, Logan Mankins, Jerod Mayo and Devin McCourty among the Pro Bowlers taken in the first round in the 2000s. But in the last decade the Patriots have been more likely to trade out of the first round entirely to gain more draft capital in the second and third rounds.

Their first-round picks, meanwhile – among them Malcom Brown, Sony Michel, Isaiah Wynn and N’Keal Harry – have failed to have the same impact as their golden generation, many of them hampered by injuries since arriving in Foxborough.

From the Patriots’ perspective, the Jones pick this year is a home run given their need at quarterback. Bill Belichick is famously reluctant to trade up in the first round and risk giving away future first-rounders, and his decision to stand pat worked to perfection when Jones was still available at 15.

If Jones does see game time for New England this year, he will have plenty of weapons to utilize. The Patriots were uncharacteristically aggressive in free agency, bringing in tight ends Hunter Henry and Jonnu Smith on expensive contracts to bolster the pass-catching corps. The high-profile signings would also allow offensive coordinator Josh McDaniels to run his favored two-tight-end formations, as he looks to reinvigorate an offense that failed to launch in 2020.