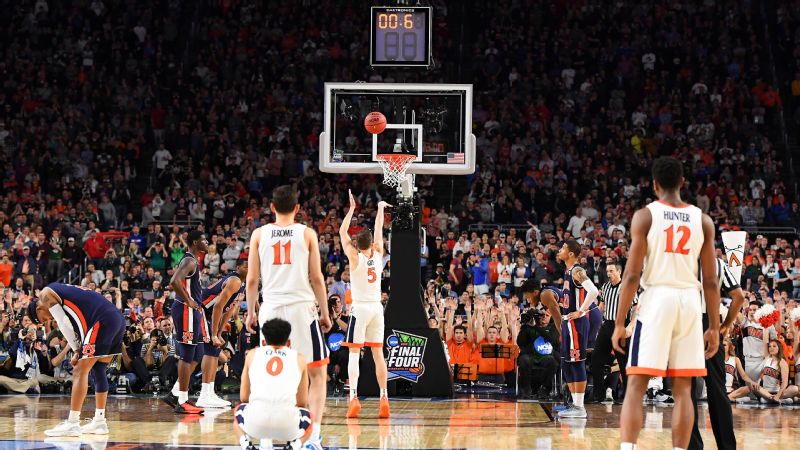 If you like high-scoring basketball games, then Monday night’s NCAA Championship Game might be hard for you to watch, but neither team cares at this point, as it comes down to the final game of the season. Both the Texas Tech Red Raiders and Virginia Cavaliers are seeking their first ever title and are proving this year that defense wins championships. In terms of scoring defense, the Cavaliers are No. 1 in the country at 55.5 points per game allowed, while the Red Raiders sit third at 58.8. Texas Tech is tops in field goal percentage defense at 36.8 percent and Virginia is fifth at 38.4 and both are in the top 10 at defending the 3-pointer. The Cavaliers’ road to the title game came a little tougher than Texas Tech’s. Just one year removed from being the first No. 1 seed to lose to a 16, Virginia trailed 16th-seeded Gardner-Webb in the first round before cruising to a 16-point victory. Their easiest win came next against Oklahoma, but then the fun started. The Cavs held off upset-minded Oregon by four points, then got a game-tying buzzer-beater in regulation versus Purdue before winning in overtime. In Saturday’s Final Four, Auburn held a two-point lead with seconds to go but fouled Virginia’s Kyle Guy with 0.6 remaining while attempting a three. The junior guard calmly knocked down all three for the victory. Texas Tech has looked strong in defeating some of the highest scoring teams in the country in Gonzaga and Buffalo, and making Michigan look like a J.V. team (63-44). The total for this game opened at 120.5, but has since been bet down to 118 – the lowest total in a championship game in 20 years. This will be the first ever meeting between these schools from Lubbock, Texas and Charlotesville, Virginia.

Texas Tech made a nice run to the Elite Eight in last year’s tournament, but lost five of its top six scorers and were predicted to finish no better than fifth in the Big 12, but the offense did enough to advance them to their first Final Four. Big 12 Player of the Year Jarrett Culver (18.6 points) thrived under third-year coach Chris Beard, who is finally being mentioned as one of the elite coaches in the country. Senior guard Matt Mooney stepped up big on Saturday by matching his season high with 22 points in the win over Michigan State, including 4-of-8 from 3-point range as Culver struggled to 10 points on 3-of-12 from the floor. Sophomore guard Davide Moretti averages double-digits (11.4 points), while senior guard Brandone Francis (6.2 points) scored nine off the bench Saturday. Senior forward Tariq Owens blocks 2.5 shots a game, while averaging 8.8 points.

Guy (team-leading 15.2 points) almost shot the Cavaliers out of the tournament, going 8-for-38 overall and 3-for-26 from 3-point range over the first three games, but has put fear into opponents in the last two (13-for-30, 7-for-18). Sophomore De’Andre Hunter is second on the team in scoring (14.9) and chipped in 14 on 7-of-11 shooting in Saturday’s victory. Guard Ty Jerome (13.5 points, team-high 5.4 assists) is averaging 22.5 points in the last two games versus Purdue and Auburn to go along with nine rebounds and six assists Saturday. Junior forward Mamadi Diakite (7.4 points) is averaging almost 3.5 points above his season average during Virginia’s tournament run, and also came up with five big blocks versus the Tigers.

I penciled in Virginia to win the tournament in my bracket on Selection Sunday, but this Texas Tech team really scares me. The Cavaliers have been living on the edge all tournament long. Will the luck run out, or are they destined? What the Red Raiders did to Buffalo, Michigan, and Gonzaga is extremely impressive and those quality wins are why I think Chris Beard’s team is better in this situation. They shoot the ball well enough and have one heck of a leader in Culver. This will be a tight game all the way through, but the Red Raiders will hold off Virginia at the end.