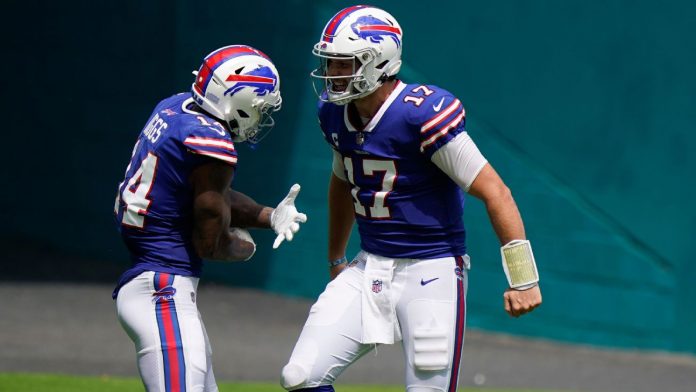 The Buffalo Bills were one of the surprise teams in 2020 and their improbable run towards the Super Bowl ended one game short. The Bills look to take the next step in 2021 and they will open the season at home against the Pittsburgh Steelers on Sunday afternoon from Orchard Park, New York. Buffalo finished 13-3 but couldn’t slow down the Kansas City Chiefs in a 38-24 AFC Championship Game loss. They will have virtually the same roster from that run and are expected to compete for the conference title once again behind improving quarterback Josh Allen.

The Steelers won their first 11 games a year ago, but fell apart at the end and couldn’t make it out of the first-round of the playoffs. They were manhandled by their nemesis, the Cleveland Browns. It’s likely Ben Roethlisberger’s final season, so the window is closing quickly.

Buffalo is a 6.5-point favorite with a total set at 48.5 as of Thursday morning. These teams met once last year, with the Bills earning a 26-15 home win in Week 14. Allen threw for 248 yards with two touchdowns and an interception in the win. Roethlisberger finished with 187 passing yards with two TDs and two big interceptions. The total has gone Under in five of the last six meetings. Buffalo thrived at home last season, winning their last seven games at the newly renamed Highmark Stadium. They’ve lost four of their last five home games against Pittsburgh, but have won the last two in the overall series. The Bills are 9-2 ATS in their last 11 games, while Pittsburgh is on a 4-1 ATS run in September.

Roethlisberger will have a completely revamped offensive line when he takes the field Sunday afternoon. Four of five starters from last season are gone, including three Pro Bowlers. Centre Maurkice Pouncey retired, offensive tackle Alejandro Villanueva signed with the Ravens and guard Matt Feiler went to the Chargers. Rookie Kendrick Green will take over at center, while Dan Moore Jr. will start at left tackle. Another Pittsburgh rookie to watch out for is running back Najee Harris, who Pittsburgh took 24th overall in the 2021 draft. In 2020, the Steelers were 31st in the NFL with a 34.52 rushing play percentage and last in the league with only 82.5 rushing yards per game. Those numbers should go up with Harris and a commitment to the running game this year. The Steelers are still trying to sign linebacker T.J. Watt before Sunday. Watt hasn’t taken part in team practices while he tries to earn a long-term contract, although he has been working on individual drills. He led the league with 15 sacks a year ago and was runner-up for Defensive Player of the Year in each of the past two seasons.

Allen is coming a career season in 2020, throwing for over 4,500 yards and 37 TDs, while completing 69.2 percent of his passes. He averaged 284 passing yards per game, finishing the season with a passer rating of 107.2. On top of that, he also rushed for 421 yards and eight touchdowns. Allen’s main target again will be Stefon Diggs, who caught eight touchdowns and led the league in receptions (127) and receiving yards (1,535). Against Pittsburgh last year, Diggs caught 10 balls for 130 yards. The Bills will come into this game fairly healthy. Defensive tackles Star Lotulelei and Harrison Phillips, as well as receiver Isaiah McKenzie have all been dealing with minor injuries, but practiced this week. The only long-term injury issue is rookie receiver Marquez Stevenson, who has been dealing with a concussion and won’t be able to play until at least Week 4. The Bills will be at Miami next week.

Pittsburgh might have issues on defense, but this offense is going to click this year. They will put more emphasis on the run with Harris, which will make life even easier for Big Ben. People might be sleeping on this Steelers team because of the way they ended last year. Look for them to come out with a chip on their shoulders and keep this one close, if not win.