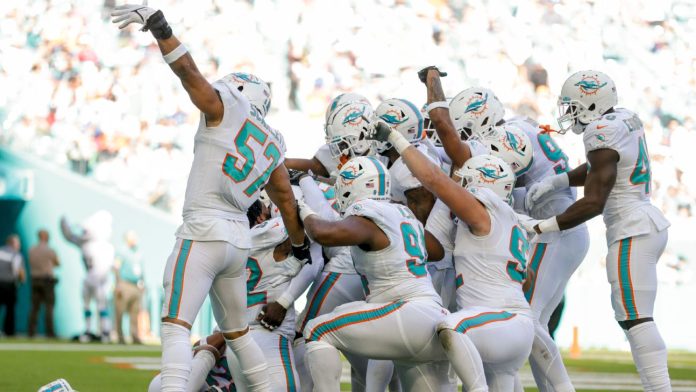 The Baltimore Ravens are coming off a couple of tough games and hope to get an easy win this week when they visit the Miami Dolphins on Thursday Night Football to kickoff the second half of the NFL season. Back in Week 6, the Ravens were handled at home 41-17 by the Cincinnati Bengals and they had to go into their bye week stewing on that one. They rebounded with a win on Sunday, but it was far from convincing. The 34-31 victory over visiting Minnesota put the Ravens back in first place in the AFC North, but the entire division is within 1.5 games of Baltimore. The Ravens rank first in the NFL this year in rushing yards per game (161.6) and second in total yards (427.9), while averaging 27.6 points per contest.

Meanwhile, the underdog Dolphins have struggled all season when it looked like they were ready to make the turn as a franchise. Miami is coming off a less-than-impressive 17-9 win over the Houston Texans and the team has already lost to Atlanta and Jacksonville this season. They also don’t know who will be under center come Thursday night. Starter Tua Tagovailoa missed last week’s game due to a fractured and swollen middle finger on his throwing hand and was limited in practice on Monday and Tuesday. Backup Jacoby Brissett took the reigns last week and won his first game since 2019. However, Miami turned the ball over five times with Brissett accounting for three of those (2 INT, 1 fumble).

Baltimore comes in as 7.5-point favorites with a total of 46.5 and have dominated this series lately. The Ravens have outscored the Dolphins 137-16 in the last three meetings including a 59-10 win here two years ago. Ravens quarterback Lamar Jackson, who is from the Miami area, had a perfect rating of 158.3 in completing 17-for-20 for 324 yards and five TDs in that blowout win. Baltimore set a franchise record for points in the first half (42), and 643 total yards for the game.

Baltimore came out of its bye this past Sunday a little rusty and needed a 36-yard field goal from Justin Tucker in overtime to beat the Vikings. Jackson threw for 266 yards and three scores and rushed for another 120. He is the first quarterback in NFL history to record multiple career games with at least three touchdown passes and 100 rushing yards. Jackson is also the first player ever with at least 2,000 passing yards (2,209) and 600 rushing yards (600) in his first eight games of a season. In prime time games, the former Heisman winner has 31 career TDs (24 passing, seven rushing) in 11 games. Jackson, who is completing 65 percent of his passes for a career best 276 yards per game so far this season, has clearly improved as a passer. Wide receiver Marquise Brown, also a south Florida native, leads the Ravens in catches (46), yards (682), average per catch (14.8) and touchdown receptions (six). However, Brown was limited in practice earlier this week due to a back injury, but is expected to play. Tight end Mark Andrews has 42 catches for 560 yards and three TDs.

Besides the three turnovers from Brissett last week, he only completed 26-of-43 for 244 yards and the team only recorded 262 total yards. That was against a bad Houston team. No telling what a better defense like Baltimore’s can do. Miami also played without two of its top receivers in DeVante Parker and Will Fuller and neither will play Thursday. It was Miami’s first win with five turnovers since 1990 after losing 21 straight such games. Miami’s defense, however, forced four turnovers against Houston to help snap a seven-game losing streak. The defense also sacked the Texans quarterback five times, but are allowing way too many yards through the air. Miami ranks 30th in total defense (391.9) and passing defense (280.9). Their 26.9 points allowed per game ranks 27th. Aside from Tagovailoa, Dolphins players who were limited in practice this week were safety Brandon Jones (ankle) and linebacker Jerome Baker (knee). Miami’s starting center Greg Mancz also missed two practices due to an ankle injury.

The Ravens haven’t look great the last two games, but this Dolphins team is really bad. It doesn’t matter who starts at quarterback for Miami on Thursday, because neither is very good and the Dolphins are very thin at wide receiver. Baltimore has dominated Miami recently and I think they do so again.