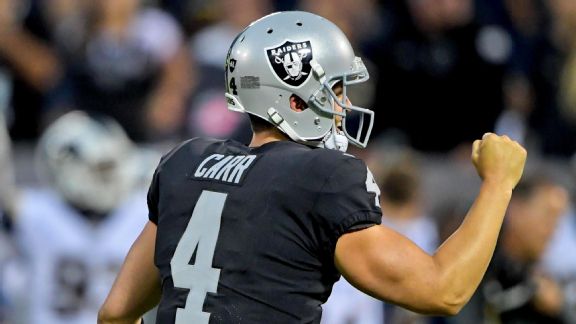 The Oakland Raiders look to stay unbeaten when they visit the Nation’s Capital to take on the 1-1 Washington Redskins in a Sunday night prime time matchup this week. The Raiders, who were having a terrific run last year until QB Derek Carr went down, look like a legitimate Super Bowl contender this year. With a win Sunday, Carr can even his career record at 25-25 – not bad considering he started out 0-10. He also needs four more scoring passes to become the fifth QB in league history with 90 in his first 50 games. The Redskins were embarrassed by Philadelphia in their home opener, but went across to California and bounced-back with a late touchdown to beat the L.A. Rams 27-20 last week. This will be the Redskins first of three prime time games over the next five weeks as they look to establish themselves as a threat in the NFC East.

Marshawn Lynch, who came out of retirement to join his hometown team, rushed for 45 yards and a touchdown in last week’s 45-20 route of the New York Jets as Oakland gained 180 yards on the ground. Carr, who broke his leg in Week 16 last season, tossed three touchdowns to Michael Crabtree against the Jets and has five TD passes against zero interceptions after throwing only six picks in 2016. Crabtree has 20 TD receptions since the start of the 2015 season, tying him for fourth in the NFL in that span. Former No. 4 overall pick Amari Cooper, who is vying for his third straight 1,000-yard receiving season, gives Carr two great targets. Defensive leader Khalil Mack recorded a sack last week to give him a league-best 27 since the start of 2015.

Quarterback Kirk Cousins threw for nearly 5,000 yards last season but is off to a sluggish start after losing his starting wide receivers in free agency. Cousins has thrown for 1,549 yards and 10 TDs in his last five games against AFC opponents. Tight end Jordan Reed and starting running back Rob Kelley are both questionable due to injuries, but third-down back Chris Thompson and rookie Samaje Perine filled in nicely for a ground game that produced 229 yards against the Rams. Washington is allowing only 77.5 yards rushing but were scorched for 307 yards through the air by second-year quarterback Carson Wentz in the season opener. Top cornerback Josh Norman injured his shoulder in the victory over the Rams and was limited in Wednesday’s practice session.

Cousins isn’t getting a chance to succeed in Washington as they keep getting rid of his best receivers. Now his favorite target in Reed is banged-up. The Redskins defense has been great against the run, but they won’t be able to stop Carr through the air in this game. Oakland is one of the best all-around teams in the league and they’re terrific on the road. They’ve also covered the last five meetings with Washington.