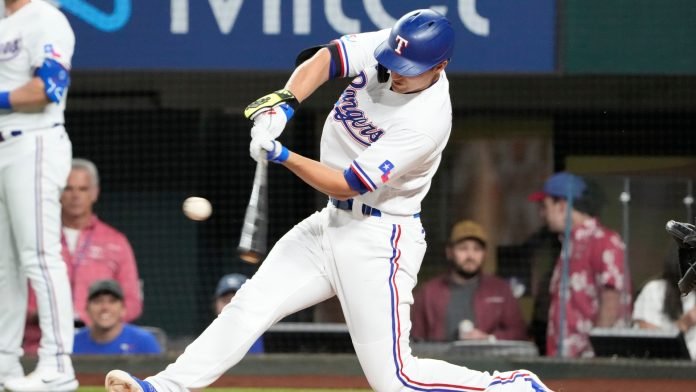 The red-hot Philadelphia Phillies begin a six-game road trip Tuesday night with the first of two at the Texas Rangers in Arlington. The Phillies were playing their way out of playoff contention when manager Joe Girardi was fired on June 1st. Since then, interim manager Rob Thomson has guided the Phils to wins in 14 of the last 17 games and Philadelphia is just 2.5 games out of a wild card spot and eight behind the New York Mets in the National League East. The Phillies got a much-needed day off on Monday after taking four of five at the Washington Nationals to improve their road mark to 17-15. The Rangers took both games at Philadelphia in early May when the Phillies really began slumping.

Texas is getting closer to the .500-mark after a slow April, but have now lost four of six after splitting a four-game set at the Detroit Tigers over the weekend. After limiting the Tigers to just one total run in the first two games, the Rangers pitching allowed 21 runs in dropping the final two. Texas has played their way back into the wild card picture and are only five games out. The offense is getting a surprise contribution from rookie third baseman Ezequiel Duran, who is hitting .291 with two home runs and eight RBIs in his 14 career games. The Rangers are 7-2 in their last nine home games against the Phillies.

Former Texas Ranger Kyle Gibson will get the start for the Phillies on Tuesday. The right-hander was dealt by Texas on July 30, 2021, as part of a deal that also sent Ian Kennedy, Hans Crouse and cash to the Phillies for Spencer Howard, Josh Gessner and Kevin Gowdy. Gibson is coming off a solid outing against the Miami Marlins last Wednesday, allowing one earned run with six strikeouts and no walks over eight innings of work.

Martin Perez brings his fourth-best American League ERA into Tuesday’s contest and is coming off a bounce-back outing. He was rocked by the Chicago White Sox on June 11 but limited the Detroit Tigers to one run over seven innings last Thursday. In seven home starts, Perez is 3-2 with a 2.45 ERA and is 2-1 with a 3.65 ERA in seven appearances (six starts) against the Phillies.

The Phillies are on a roll right now both offensively and pitching. Since Thomson took over, the Phillies are 7-1 away from home. Perez is Texas’ best pitcher, but the Phillies are hitting almost .300 against lefties in the last 10 games. I’ll take the hotter team.