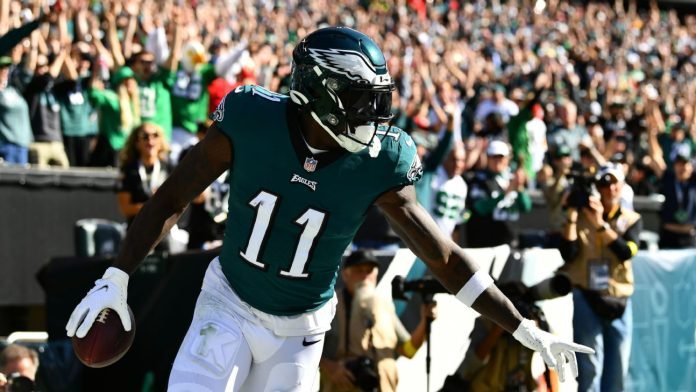 The Philadelphia Eagles are soaring with a 9-1 record but the last two weeks have been anything but pretty. They will try and work things out this Sunday night when the Eagles host the struggling Green Bay Packers at Lincoln Financial Field. Philly was a perfect 8-0 heading into a Monday night matchup at home versus Washington, but the Commanders pulled off the upset as 11-point underdogs. Then, the Eagles had to rally late to beat the Indianapolis Colts 17-16 last Sunday. The Eagles turned the ball over four times against Washington and twice more against Indy, after committing only three turnovers through the first eight wins. With only a 1.5-game lead over the Dallas Cowboys, Philadelphia has to keep winning before their Week 16 Christmas Eve matchup in Texas.

Meanwhile, the Packers are in danger of missing the playoffs for only the fourth time in Aaron Rodgers’ 15 seasons as the starting quarterback. Things looked great two weeks ago when the Packers came back to upset the Cowboys 31-28 at home, but a Thursday night 27-17 loss to the Tennessee Titans dropped Green Bay to 4-7. They are a full three games outside the playoff picture right now and might need to win out. The Minnesota Vikings have all but wrapped up the NFC North, so it’s wild card or bust. These teams last met in Week 13 of the 2020 season at Lambeau Field with the Packers winning 30-16. Rodgers threw for 295 yards and three scores, while Aaron Jones had 130 rushing yards. Carson Wentz started that game for Philly, but he was ineffective and eventually was replaced by a then-rookie Jalen Hurts. The road team is 5-2 ATS in the past seven meetings.

Rodgers was 24-for-39 for 227 yards and two scores last week and has been playing through a thumb injury. The Packers have now lost consecutive primetime games with Rodgers as the starter after winning 13 straight. Rookie Christian Watson continues to impress with two more touchdown catches last week and now has five in the past two games. The Packers were held to 56 rushing yards and 271 total yards by the Titans, who never trailed. Offensive linemen David Bakhtiari (knee), Elgton Jenkins (knee) and Rasheed Walker (illness) did not practice for the Packers on Wednesday. On defense, linebacker De’Vondre Campbell (knee), safeties Rudy Ford (illness) and Tariq Carpenter (illness) also missed practice.

Down 13-3 entering the fourth quarter against the Colts, Hurts threw a 22-yard touchdown pass to Quez Watkins with 13:31 to play and rushed up the middle for the go-ahead, 7-yard score with 1:20 left. Hurts led the team with 86 yards on the ground and also threw for 190 yards and a TD. The team signed defensive tackles Linval Joseph and Ndamukong Suh last week and both were solid in their debuts. Joseph played 40 percent of the defensive snaps and Suh 26 percent and combined for seven tackles, two quarterback hits and a combo sack. The Eagles are 5-5 against the spread in their last 10 games overall and will host Tennessee next week.

The Eagles haven’t looked great the last two weeks, but they’re getting a team in Green Bay that is a mess. Philly’s defense will hound Rodgers all night, which will prove to be the difference. I don’t see the Packers getting many points. This could be a blowout.