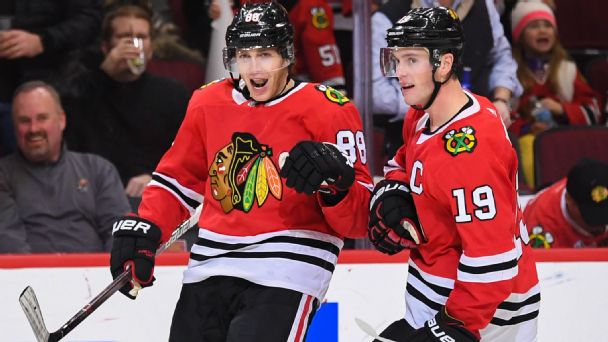 The Edmonton Oilers’ powerful offense led by superstar Connor McDavid showed the Chicago Blackhawks that they won’t lay down to anyone. The Oilers and Blackhawks will engage in Game 3 of their best-of-five qualifying series on Wednesday night in Edmonton all tied at one a piece. In need of a quick start, McDavid opened the scoring just 19 seconds into the contest and then added another at the 4:05 mark. Then, he completed a hat trick with a power-play goal late in the second period of Edmonton’s 6-3 win on Monday. The 12th-seeded Blackhawks – the lowest-seeded Western Conference team in the qualifying round – dominated Game 1 with their veteran presence and youthful skill. Edmonton’s first three first three goals came after Chicago turnovers, something the Blackhawks need to improve on. Chicago forward Drake Caggiula is eligible to return after serving his one-game suspension issued after the series opener for a hit on Tyler Ennis.

McDavid now has six points (4G, 2A) in the first two games of the series, but is only tied for the team lead with Ryan Nugent-Hopkins (1G, 5A), who is quietly playing some of the best hockey of his playoff career. Goalie Mikko Koskinen seems to have taken the No. 1 role from Mike Smith, stopping 41 of 45 shots faced in the series. If McDavid, Nugent-Hopkins and Leon Draisatil keep playing at a high level, the Oilers just might advance to the 16-team playoff.

Chicago’s top line of Jonathan Toews, Brandon Saad and Dominik Kubalik combined for 10 points in Game 1, but went scoreless on Monday. They went 0-for-4 on the power play and were outshot 35-26. Veteran goalie Corey Crawford seems a little shaky and even badly misplayed a puck in the third period to lead to an easy James Neal. Chicago will need to tighten up on defense if they want to take Game 3.

I love this Edmonton team, but Chicago won’t back down. They still have the veteran leadership that can carry them to a series win and I think Crawford will be a little better in goal this time around.