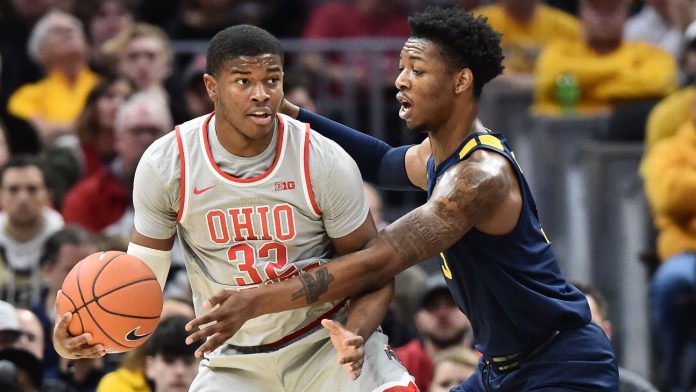 What a way to cap off the Big Ten regular season. No. 4 Illinois, fresh off a huge win over No. 2 Michigan, travels to Columbus to take on No. 7 Ohio State.

When the two teams played back in January, Ohio State’s E.J. Liddell scored 26 points and the Buckeyes won 87-81. Ohio State is in desperate need of a win. They have lost three straight. Can they get it at home in the final game of the regular season?

Illinois has played itself right into a No. 1 seed come March Madness. The Illini have won 10 of their last 11 games. In those 11 games, they have covered the spread eight times.

Included in the Illini’s pile of victories are wins over ranked Iowa, Wisconsin, and the Wolverines. Illinois dismantled Michigan without leading scorer Ayo Dosunmo (21.0 ppg), who is out with a broken nose.

Before their late season run, Illinois had lost two straight. They lost to unranked Maryland at home then followed that with an 87-81 defeat at the hands of the then-No. 21 Ohio State Buckeyes.

In that game, E.J. Liddell scored 26 points as Ohio State won as a 7-point road underdog. Lately though, the Buckeyes have been having their fair share of difficulties.

MUST READ: HOW TO START AN ONLINE CASINO

After winning seven straight, Ohio State has lost its last three games – No. 2 Michigan, Michigan State, and No. 5 Iowa. The Buckeyes could really use a win as they head into the conference tournament.

The latest bracketology has the Buckeyes as a No. 2 seed, but with their recent letdown that could change. Illinois is currently projected as a No. 1 seed and would love to hold onto that position. No. 1 seeds tend to have an easier road to the Final Four.

With Ohio State’s recent downturn and Illinois’ big win over Michigan, expect the Illini to be a road favorite on Saturday. It’s entirely possible the Illini are favored by seven as they were in the first meeting back in January.

Illinois, with its three straight wins, has been very good to sports bettors as well with three straight covers. That includes back-to-back covers as a road underdog at Michigan and at Wisconsin.

With Dosunmo possibly out again and the Buckeyes at home desperately needing a win, play Ohio State and the points down to +3. This is a game Ohio State could win outright and they have already proven they can beat Illinois.

Our last time out we had a Virginia Tech at Florida State free pick, take a look how we did.