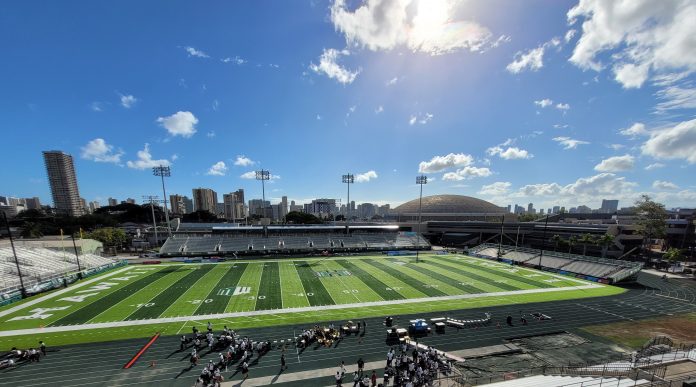 One of my favorite Christmas Eve traditions is back after a year absence as the Hawaii Bowl returns to our TVs this Friday night on ESPN. This year’s matchup is not the most intriguing with a pair of six-win teams battling, but we know the weather will be almost perfect. The Memphis Tigers out of the American Athletic Conference battles the hometown Hawaii Warriors out of the Mountain West Conference. It’s the first ever meeting between the schools, but Friday’s starting quarterbacks know each other well. Seth Henigan of Memphis and Brayden Schager of the Warriors met almost one year ago in the Texas Class 5A playoffs. Henigan’s team got the better of the matchup with a 17-7 victory en route to a state championship.

Memphis finished 3-5 in conference play and earned their sixth win in the regular season finale – a 33-28 win over Tulane. Three of their six losses this season came by a field goal or less. Hawaii was also 3-5 in conference play and they too gained bowl eligibility on the last day with a convincing 38-14 win at Wyoming. Five of their seven losses were by at least 14 points. Both teams are appearing in their 15th bowl game. Hawaii is 8-6 including 5-4 in the Hawaii Bowl, while Memphis is 5-9 overall.

Henigan broke the Memphis freshman record with 3,322 passing yards averages 315.4 yards per game of total offense. He has thrown 25 touchdown passes and eight interceptions but won’t have his No. 1 wideout in Calvin Austin III. Austin, who had 74 catches for 1,149 yards and eight TDs, has opted out to prepare for the NFL draft. Tigers defensive backs coach Charles Clark was named the interim defensive coordinator earlier this month after Mike MacIntyre left to become the Florida International head coach. Memphis started the season strong, but went 3-6 the rest of the way. The ranked fifth in the AAC with 30.1 points per game under Henigan. The under is 5-1 in Memphis’ last six games overall.

Schager started just three games this season but will get the nod here because leading passer Chevan Cordeiro has entered the transfer portal. Schager completed 60.7 percent of his passes for 615 yards with two touchdowns and five interceptions. Cordeiro passed for  2,793 yards and 17 touchdowns and had 323 yards passing and three scores in Hawaii’s bowl-clinching win at Wyoming. He also rushed 14 times for 86 yards and a touchdown and the Warriors will sure miss his dual-threat capabilities. Hawaii has four players with at least 300 rushing yards this season, led by Dae Dae Hunter (651), but he has also entered the transfer portal. Dedrick Parson is next with 618 rushing yards and eight touchdowns.

Hawaii is really hurting for star players on offense after their QB and top RB left the team. There weren’t a very good team with them to begin with. Memphis can score in bunches and should have no trouble getting motivated to finish 7-6. This line has ballooned all the way up to 9, but I’ll still lay it.