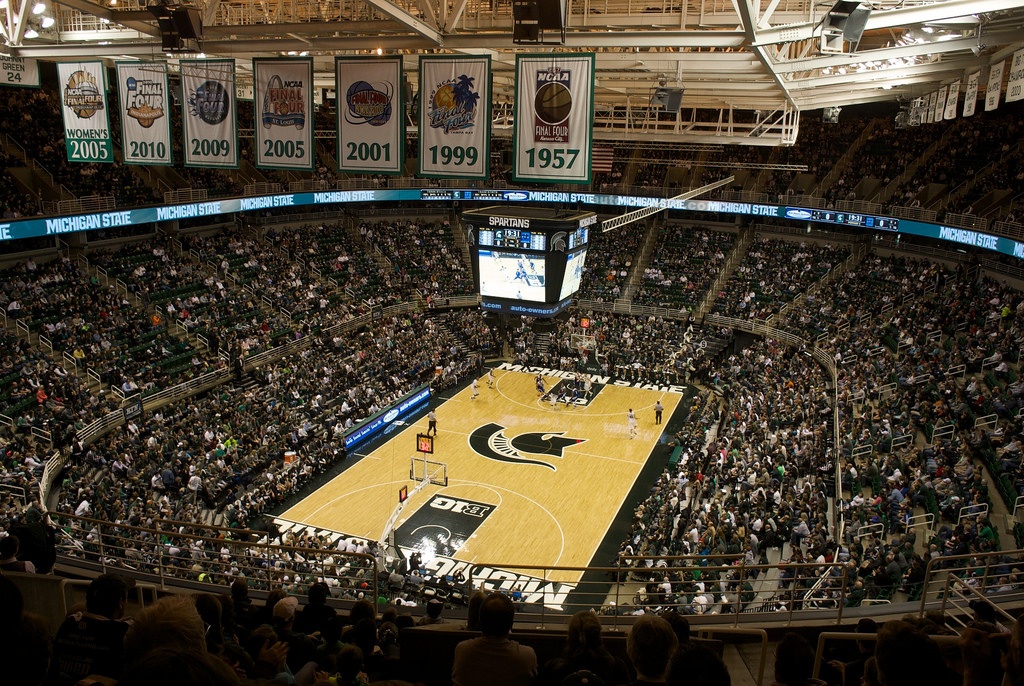 The Maryland Terrapins know that if they are to win the Big Ten regular season title, they’ll need to beat the Michigan State Spartans at least once in the final few weeks. The teams will play the first of two meetings – next on Feb. 29 – on Saturday night in East Lansing, as the ninth-ranked Terrapins go for their eighth straight victory and look to stay atop the standings. Right now, Maryland owns a one game lead over surprising Penn State, while the Spartans are lurking right behind at 1.5 games out. The Terps are coming off a 72-70 victory over lowly Nebraska on Tuesday, perhaps looking ahead to this big matchup on Saturday night, while the Spartans pulled out a 70-69 victory at Illinois the same night. Senior guard Anthony Cowan Jr. is coming off his first double-double (13 points, 10 assists) since his sophomore season against the Cornhuskers, but Maryland has seen forward Jalen Smith give them a big boost. The sophomore leads the team with 16.8 points, 10.6 rebounds and 2.3 blocks per contest, including the game-winning rejection on Tuesday. Michigan State’s Cassius Winston leads the Spartans with 18.3 points and 5.7 assists per game. The Spartans won the lone meeting in 2018-19 – a 69-55 home victory as 8.5-point favorites.

Cowan leads Mark Turgeon’s club in scoring (16.3 points per game) and assists (4.6). Maryland ranks 18th in the country in defensive field goal percentage (38.4) and 25th in points allowed (62.2). Smith was one of four starters to score in double-digits versus the Cornhuskers, going 7-for-10 from the field as part of his 16 points, while guard Eric Ayala recorded double-digits for the second straight game with a season-high 16 points. The Terrapins will host last place Northwestern on Tuesday.

Junior forward Xavier Tillman contributes 13.6 points, 10.2 rebounds, 3.1 assists and 2.1 blocks per outing for a Michigan State team ranks No. 1 in the nation in assist percentage (66 percent). Freshman guard Rocket Watts, who came into the Illinois game averaging 7.2 points, went for a career-high 21 points, hitting 9-of-14 from the floor and committing just one turnover in 29 minutes. Forward Aaron Henry scored 13 points for his second consecutive double-digit outing, but the bench contributed just seven points from six players. The Spartans will be at Nebraska next Thursday.

Maryland is too good to be getting this many points and many players have been pointing to this game since last year’s blowout loss. Look for the Terps defense to keep this one close.