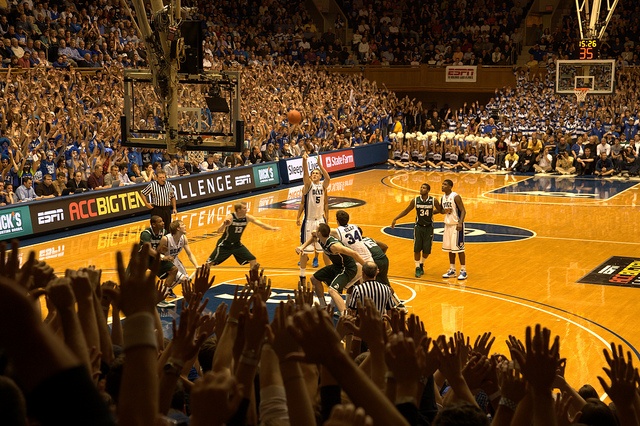 Winning on the road in conference play isn’t easy no matter how good you are and the Duke Blue Devils found that our earlier this week in a loss at Clemson. They come back home Saturday night to host the 10th-ranked Louisville Cardinals in a battle for first place in the ACC. Both Duke and Louisville have 5-1 conference marks – tied with Florida State – and are looking to improve their NCAA Tournament resume. The Blue Devils allowed Clemson to hold the lead for more than 28 minutes en route to a shocking 79-72 road loss for their first setback in eight games away from home (4-1 road, 3-0 neutral). Louisville was on the road earlier this week as well, and pulled out a hard-fought 73-68 overtime victory over Pittsburgh despite trailing for more than 33 minutes. Last year’s contest between these teams will go down as one of the more memorable of all-time. The Cardinals held a 23-point lead with just under 10 minutes remaining at home over a Duke team led by future NBA lottery picks Zion Williamson, RJ Barrett and Cam Reddish. But Duke outscored the Cardinals 35-10 to end the game in one of the biggest comebacks in school history. The Cardinals are 1-4 all-time at Cameron Indoor Stadium and have lost both of their games there since joining the ACC in 2013-14.

Dwayne Sutton is averaging almost a double-double on the season (9.2 points, 9.1 rebounds) and finished with 13 points and nine boards in the win over Pitt on Tuesday. The senior forward is averaging 11 rebounds and 1.5 blocks over his last six games. ACC leading scorer Jordan Nwora (20.4 points) was held to 14 points versus the Panthers, as was Steven Enoch (10.8), who are the only double-digit scorers for the team. Sutton and freshman David Johnson combined for 24 points and four 3-pointers to help pick up the scoring slack. Johnson set season highs in points (11), assists (four) and minutes (20). The Cardinals return home next week to host Georgia Tech and Clemson.

Freshman center Vernon Carey Jr. leads the ACC in field-goal percentage (60.5), is fourth in scoring (17.6), fifth in rebounding (8.5) and tied for fourth in blocks (1.9), but has scored fewer than 10 points in each of his team’s home conference games. Tre Jones is second on the team at 15.1 points a game and averaged 19.5 points on 68.2 percent shooting, 5.5 rebounds, six assists and four steals last week. He’s the only player in the conference who ranks among the top five in assists (6.8), steals (2.2) and assist/turnover ratio (2.3). The Blue Devils will welcome back sophomore Joey Baker (6.5 points in 14.2 minutes) on Saturday after he missed the Clemson game due to a sprained right ankle. Duke will host Miami FL and Pitt next week – making it three straight home games.

This will be Louisville’s third straight road game and they’ve barely escaped the first two. Duke will come out more focused in this game than they did last year’s contest and roll to an easy victory.