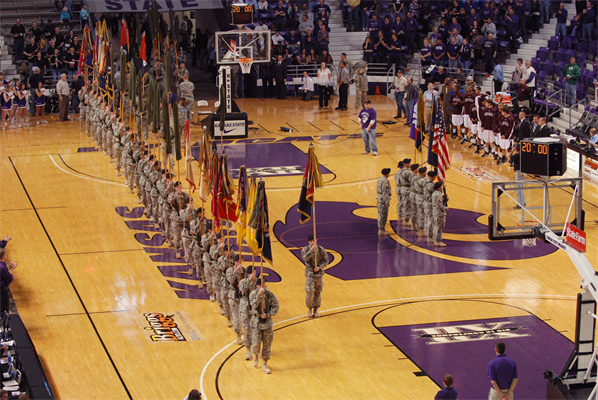 The Kansas State Wildcats have been the little brother to their instate rivals the Kansas Jayhawks for a long, long time, but have a chance to accomplish something they haven’t done since the disco-era. The Wildcats lead the Big 12 by 1.5 games over both Texas Tech and Kansas, and will host the fourth place Iowa State Cyclones on Saturday in what is the biggest game of the season in Manhattan – at least until the next one. Kansas State last won a regular season conference championship way back in 1977 when it was still called the Big 8 Conference, and they’ve never won the Big 12. The Wildcats have reeled-off nine straight conference wins after an 0-2 start, but a loss on Saturday would really make things interesting for the rest of the conference schedule. Iowa State is still very much alive and are tied with Baylor – two games behind Kansas State – after a 92-83 loss to TCU in their last outing, snapping a four-game winning streak. Kansas State has won three straight meetings, including 58-57 in Ames last month as senior guard Barry Brown hit the game-winner with four seconds left. Iowa State is tops in the conference in scoring at 79.0 points per game while the Wildcats are last at 65.9.

Iowa State is not only effective on offense, but they have a pretty solid defense as well, ranking 64th in the country at both points allowed (66.8) and field goal percentage defense (41.5). Senior guard Marial Shayok is coming off a big performance against TCU, recording 24 points and seven rounds and leads the Big 12 in scoring (19.3). Junior forward Michael Jacobson (team-high 6.1 rebounds) recorded 16 points versus TCU, marking his highest-scoring Big 12 game for an Iowa State team that has failed to cover the spread in their last three games. Sophomore guard Lindell Wigginton (12.6 points) is averaging 15.8 points over the last five games, while senior guard Nick Weiler-Babb contributes 9.8 points, 4.8 rebounds, 4.0 assists on the season.

Kansas State is ranked fourth nationally in points allowed (59.5), but they’re even tougher at home, allowing just 56.9 points a contest and have covered the spread in eight of their last 10 games overall. Brown leads the team in points (15.4 points), but is averaging 18.6 points during the team’s winning streak in conference play. The Wildcats have four players averaging in double-figures including senior guard Kamau Stokes (10.3) and junior forward Xavier Sneed (10.0) add scoring depth with the latter averaging 13.0 points and 6.0 rebounds in the last three games. The other double-digit scorer is senior forward – and Big 12 Preseason Player of the Year – Dean Wade (13.9 points, 6.7 rebounds), who has scored 12 points in each of the last three games since scoring a season-high 24 versus Oklahoma State prior to that.

Kansas State really has a knack for shutting teams down at home, and did a number on Iowa State back in Ames, holding them to 35.7 percent from the field. Iowa State is a solid team, but the Wildcats are on a roll and the favorite is 5-2 ATS in the last seven meetings.

Cyclones are 5-1 ATS in their last 6 games following a straight up loss.