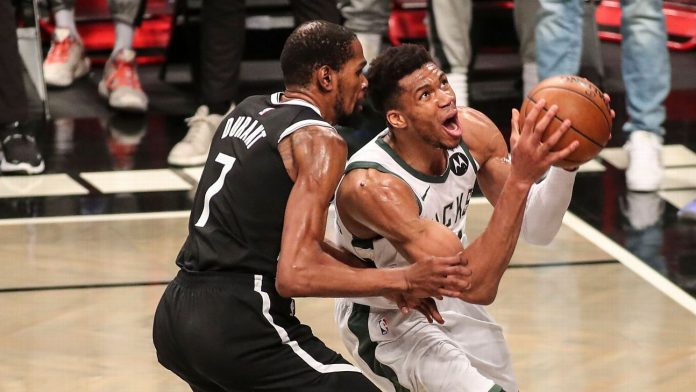 Raise your hand if you predicted the Atlanta Hawks and Milwaukee Bucks would meet in the Eastern Conference finals. I’m waiting… That’s what I thought. OK, so maybe a couple of people had it, but were you really that confident? I’m sure the NBA was hoping for a Brooklyn Nets vs. LA Lakers Finals, but we’ll have to settle with the winner of this series facing either the fun Phoenix Suns or the Kawhi Leonard-less L.A. Clippers. Game 1 between the Hawk and Bucks takes place on Wednesday night from Fiserv Forum in Milwaukee, Wi. on Wednesday night. Both teams took out the favorites in the East as the Hawks grinded out a seven-game series win over the Philadelphia 76ers, while the Bucks upset Brooklyn on their home floor in Game 7 on Saturday. The Bucks are 7.5-point favorites for the opener on the NBA odds with a total of 226.5.

This will be the first time Atlanta and Milwaukee meet in a playoff series since the first round in 2010. The Bucks were last in the East Finals in 2019 when they took a 2-0 lead over the Toronto Raptors but then lost the next four to the eventual champions. Atlanta was last in this round in 2015 and was swept by LeBron James and the Cleveland Cavaliers.
Milwaukee won two of three in the regular season and won their lone home meeting 129-115 on Jan. 24. The Hawks were struggling back then and hadn’t fired Coach Lloyd Pierce yet. They have been one of the NBA’s best teams since replacing Pierce with Nate McMillan on March 1. Atlanta is 12-3 against the spread in its past 15 in Milwaukee.

We predicted the Hawks would over Game 7 against Philly on Sunday and we’re leaning towards them again here. The big question Atlanta has going into this series is the health of sharp-shooter Bogdan Bogdanovic, who is dealing with a knee injury. He did play in Game 7 but was ineffective with four points in 21 minutes. Superstar Trae Young had a terrible shooting performance on Sunday (5-for-23) but has come up with the big shots when it matters most. Young’s 21.7 shooting percentage was tied as the fourth-worst (minimum 20 attempts) in a Game 7 in NBA history. Kevin Huerter carried the team with 27 points. Atlanta is the second team ever under the current playoff format (since 1984) to reach a conference final without having an All-Star on the roster since the 1994 Indiana Pacers. The Hawks are 4-1 against the spread in their last five games as a road underdog.

The Bucks have won an NBA title but never the Eastern Conference. They won the 1971 NBA Finals when located in the Western Conference. Milwaukee has the benefit of an extra day of rest after a 115-111 victory in overtime at the Brooklyn Nets on Saturday. If Nets star Kevin Durant had his toe about an inch further back on a shot in the final seconds of regulation, it would have been a 3-pointer and a victory instead of sending the game to overtime. Two-time league MVP Giannis Antetokounmpo struggles with 3-pointers and free throws but averaged 31.9 points and 12.9 rebounds in the Nets series. Antetokounmpo poured in 40 points to go with 13 rebounds in Game 7. Khris Middleton shot just 9-of-26 from the field but came through with 23 points. Jrue Holiday has shot just 39.8 percent from the field this postseason. The Bucks are 5-2 against the spread in their last seven games following a straight-up win.

I do think Milwaukee wins this series, but the Hawks won’t lay down and make it easy. They are a confident team right now with a true star in Young. 7.5 is too many points for me to lay in Game 1.