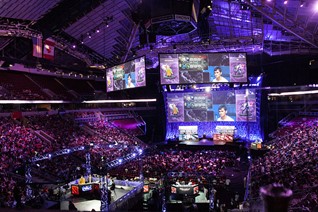 The IEM Cologne 2022 has triumphed statistically due to the more than 1,200,000 spectators watching the final between FaZe Clan and Natus Vincere. Both finalists have the largest fanbase in the CS:GO ecosystem, which explains the highest number of viewers in this event.

After three weeks of a journey through the two stages presented by the tournament, it was time to know if the Cathedral would have a new champion or if the Ukrainian organization would claim the trophy again.

Finally, after five action-packed maps of play, FaZe Clan defeated NaVi team 3-2 in the Grand Final. The North American organization has been proclaimed champion of the IEM of Cologne, taking $400,000 to home. In addition, the triumph brought the FaZe team 1400 ESL Pro Tour points and the third victory in the fourth season of the Intel Grand Slam Award.

Currently, there is one more ESL series tournament left for FaZe Clan to hit the IGS and receive $1,000,000 in gold bars. The next up is ESL Pro League Season 16, which will take place on August 31, 2022. If you don’t want to miss out on the karrigan’s team performance at this contest, rely on the https://csgobettingz.com/ webpage.

As for now, let’s come back to the Grand Final of IEM Cologne 2022, which has been the highest level confrontation in the history of CS:GO.

Recap of the Grand Final Match

Before the end of the arrival of the summer break, Natus Vincere and FaZe Clan had to meet for the first place on the stage in the Lanxess Arena. Both had passed the semifinals with a resounding 2-0 on the scoreboard. The Ukrainian team took down Astralis, while FaZe got rid of aggressive Movistar Riders. Below, you can see one of the craziest series between these two favorites, where the North American club managed to end the night by stealing the trophy from the CIS giants.

The Ukrainian team took the lead in the first half by 9-6, even though Twistzz got FaZe off to a good start by scoring 5 consecutive rounds from the terrorist side. In the change of sides, the North American organization managed to cut the difference from the anti-terrorist side, which is more favored on Inferno. With a partial score of 4-10 in the second half, FaZe put 13-16 on the scoreboard.

The next up was Overpass, chosen by Natus Vincere as the second map. The CIS giants was constantly good on both sides and were more prepared than on the first map. However, a sign of the equality of the match came after the change of the sides. Twistzz appeared after ups and downs to add a decisive 10-8 in the half of the second part. Despite a great fight throughout the map, NaVi prevailed in this game and put the 1-1 with a 16-13.

In Ancient, the Ukrainian team added eight rounds in a row in the first half to get 12-3 frightened. However, after this magnificent defensive wall, there was a surprise to see NaVi’s inability to close the advantage. With 15-4 on the scoreboard, the American opponent cut the difference by scoring 11 wins in a row.

It seemed that both teams only knew how to defend, but in overtime, the Ukrainian club looked already much more prepared. Valeriy “b1t” Vakhovskiy helped his team to dominate the clutch and win 19-16.

Mirage was a risky pick by FaZe and it turned out to be the most unbalanced map of the final. Nevertheless, the Americans became strong in the first half from the CT side with a 5-10. After the change of the sides, a 4-6 was enough for FaZe to reach the final game. The American organization dominated the map with an iron performance of Robin “ropz” Kool, who experienced the best level from the terrorist side.

Nuke was the final map and showed the maximum equality of the final match. The CIS squad started on the offensive side, which is less favored at the nuclear power plant. Despite this, the players of the Ukrainian club managed to close the first half with a fruitful 8-7 lead. With 14-13 on the scoreboard, Twistzz led his team to a long-awaited victory with the highest level in CS:GO history.

MVP of the Cathedral

Oleksandr “s1mple” Kostyliev was chosen as the MVP of this tournament thanks to more than outstanding performance throughout the competition. The NaVi AWPer finished this event with a +10 and 1.10 rating. Along with it, some of the notable categories are as follows:

According to this, the Ukrainian star was ahead of players like Twistzz, ropz, and broky, among other outstanding figures during these days of the tournament.