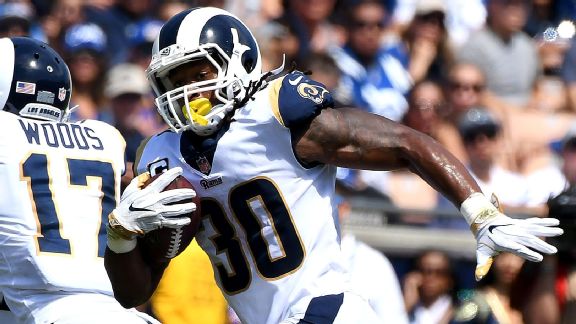 Two of the top NFL offenses will square-off on Sunday afternoon as the Los Angeles Rams host the Philadelphia Eagles in a matchup of the top two picks from the 2016 draft. Top overall pick Jared Goff (3,184 yards, 20 TDs, eight INTs) of the Rams and second overall pick Carson Wentz (3,009 yards, 29 TDs, six INTs) of the Eagles will be the eighth matchup between two quarterbacks who went first and second overall. Goff threw for two touchdowns for the second straight week and guided his team to its sixth win in seven games with a 32-16 victory at Arizona last Sunday in the desert. Philadelphia was unable to clinch the NFC East title after seeing its nine-game winning streak come to an end with a 24-10 loss on Sunday Night Football at Seattle, but the Eagles can wrap up the division with either a win or a Dallas loss this week. Wentz threw for a season-high 348 passing yards against the Seahawks, but failed to throw for multiple touchdowns for the first time since Week 4. The Eagles rank first in the NFL in point margin (+146) and third in offensive yards per game (385.1), while the Rams rank second (+139) and fourth (372.7), respectively.

Wide receiver Nelson Agholor, who is having a break-out season, hauled in a touchdown pass for the second straight game to go along with seven receptions for 141 yards against the Seahawks. Agholor has scored seven times to tie fellow wideout Alshon Jeffery and tight end Zach Ertz for the team lead. Ertz, who ranks fourth among NFL tight ends with 57 receptions and 663 receiving yards, cleared concussion protocol on Thursday and is in line to play on Sunday. The running-back-by-committee approach of LeGarrette Blount, Jay Ajayi and rookie Corey Clement had a rough time against Seattle, but will be facing a Rams’ defense that ranks 27th against the run (122.8 yards per game). The Eagles are tops in the NFL against the run (68.1) and third in overall defense (293.2).

Running back Todd Gurley leads the NFC with 1,502 scrimmage yards and is tied for first with 11 total touchdowns, but will have his work cut out for him on Sunday against the Philadelphia defense. Wide receiver Sammy Watkins continues to make the most of limited receptions, finding the end zone in four of his last five games despite catching just 13 balls in that span. Goff has thrown for 709 yards with five TDs and one interception in his past two games at the Coliseum. Inside linebacker Alec Ogletree also scored a touchdown on a 41-yard interception return last week versus the Cardinals, but injured his left elbow while making a tackle to put his availability in question against Philadelphia.

This is a nice matchup that could be repeated in January. Right now, the Eagles have the better overall team and should rebound from their loss in Seattle. I expect the Philadelphia defense to give Goff trouble all day and the Eagles rushing attack will have a field day against the Rams. This will also feel like a home game for Philadelphia. The Rams have been practicing the silent count this week in preparation for a hostile crowd.