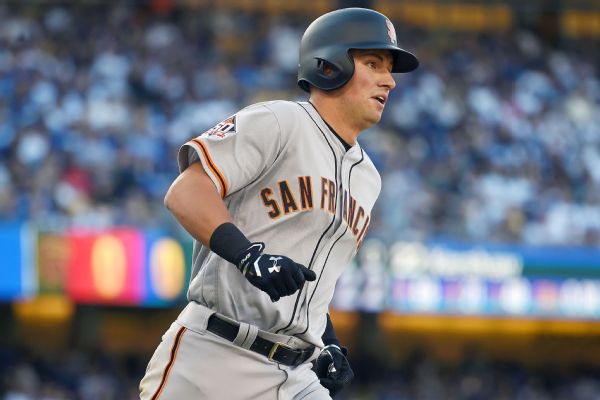 The Arizona Diamondbacks took over first place in the competitive National League West this weekend with a very successful homestand, but will take their 12-14 road record on a six game trip beginning with the first of three against the San Francisco Giants at AT&T Park. The division is getting really tight, as only 5.5 games separate the first place Diamondbacks with last place San Diego. The Giants are right in the middle of it, 2.5 games back after sweeping the Philadelphia Phillies over the weekend. San Francisco outscored the Phillies 12-1 in the three-game sweep with pitcher Jake Arrieta contributing the only run for Philadelphia (solo HR). Meanwhile, Arizona’s David Peralta comes in with a hot bat, blasting his 10th homer in Sunday’s 6-1 win over Miami to give him six hits, six RBIs and three runs scored during his four-game hitting streak. Peralta had lots of company over the weekend, as the Diamondbacks homered nine times versus the Marlins en route to scoring 42 runs while winning five of six on the homestand. San Francisco ran its winning streak to five on Sunday as Andrew McCutchen launched a three-run homer to highlight his fourth multi-hit performance in eight games heading into a matchup with Monday starter Zack Godley, against whom he is 4-for-7 in his career. Catcher Buster Posey also went deep on Sunday, giving him seven hits – including two homers – with five RBIs and four runs scored in his last five games.

Godley has been up-and-down all season, but one of his best outings this season came against the Giants on April 9th when he scattered four hits and struck out a season-high nine batters over seven scoreless innings in a 2-1 victory. Godley won two of his next three starts before enduring a five-start winless streak that ended on Tuesday with a two-run, six-inning effort against Cincinnati. He is 2-1 in five career appearances against San Francisco while limiting the Giants to a .174 batting average.

Derek Holland will oppose Godley and the veteran lefty has not been sharp lately. He allowed four runs for the second time in three outings, but came away with a win at Colorado on Wednesday. Holland pitched well opposite Godley in the April 9th encounter, overcoming Paul Goldschmidt’s triple in a two-run first inning before limiting them to just those two runs on as many hits while striking out eight in six innings.

I have to give the edge to Godley and Arizona in this one. Holland has been bad at home (5.75 ERA) and even worse at night (5.93), and he’s allowed less than three runs just once in his last nine starts. Arizona’s bats are getting hot and should have an easy time with Holland.