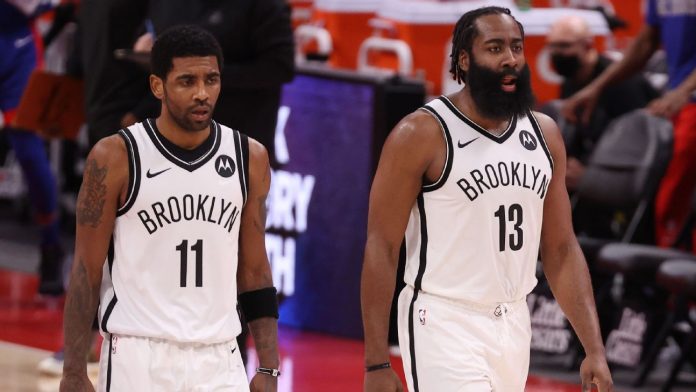 I think we all know that the Brooklyn Nets will be facing the Milwaukee Bucks in what should be a great second round matchup. The only question remains is how long will it take for the Nets to finish off the Boston Celtics first. Game 5 of the first round series takes place on Tuesday night in Brooklyn, as the Celtics try and force another game back in Boston. The Nets have dominated this series so far thanks to the big three of Kevin Durant, Kyrie Irving and James Harden. The trio have combined to average a staggering 85.9 points a game in taking a commanding 3-1 series lead. A win would clinch Brooklyn’s first trip to the Eastern Conference semifinals since 2014 and set up a showdown with the third-seeded Bucks. The Nets are coming off a 141-126 win on Sunday after Brooklyn was shocked 125-119 in Game 3 on Friday. In Sunday’s win, Brooklyn shot 57.8 percent, 59.3 percent from 3-point range (16-of-27) and 96.7 percent from the foul line (29-of-30) while also getting 29 assists. It’s hard to stop a team that can put up those type of numbers. For the series, the Nets are averaging 123.5 points on 49.3 percent shooting, 41.6 percent from 3-point range and 92 percent from the foul line. The Celtics have received 90 points in the past two games from Jayson Tatum, but his supporting cast has done nothing. Tatum scored 40 points on 10-of-22 shooting and hit 17-of-17 free throws, but the Celtics shot 43.5 percent and hit 34.1 percent of their 3-pointers Sunday. The Celtics held a nine-point lead a little over halfway through the first quarter before the Nets took over. Brooklyn made their first 10 shots of the second quarter and led by double-digits for the final 28:45. Brooklyn is a heavy 12-point favorite on Tuesday with a total set at 231.5.

Boston is going nowhere without Jaylen Brown, who is out for the rest of the postseason. Now, the injury concerns are worse with Kemba Walker (knee) and Robert Williams III (toe) sitting out Game 4. With those two players out, the Celtics lost 44.0 points of much needed production. Romeo Langford was moved into the starting lineup, after appearing in just 18 games during the regular season and finished with nine points. The big issue with Boston right now is clearly a lack of support for Tatum. Marcus Smart and Evan Fournier added 16 points apiece on Sunday, but the duo was a combined 9-of-27 from the floor and 4-of-18 from 3-point range.

With 42 points in the game, and 17 in the third quarter alone, Durant became the first player in franchise history with back-to-back 35+ point playoff games. Irving scored 39 points against his former team in Game 4 and it was the second time in NBA playoff history where a team had multiple 35-point scorers in consecutive games (1962 Lakers). Harden was third on the score sheet with 23 points and a playoff career-high 18 assists. It was the first 20-point, 15-assist game in franchise history. The trio set a record with 104 points in Game 4. The Nets are 8-1 ATS in their last nine games overall.

This Brooklyn team is getting stronger and stronger with each game that the trio is playing together. They are simply unstoppable and own the Celtics. The Nets are a perfect 8-0 ATS in their last eight home games against Boston and even though this spread is high, I’m still laying the points.