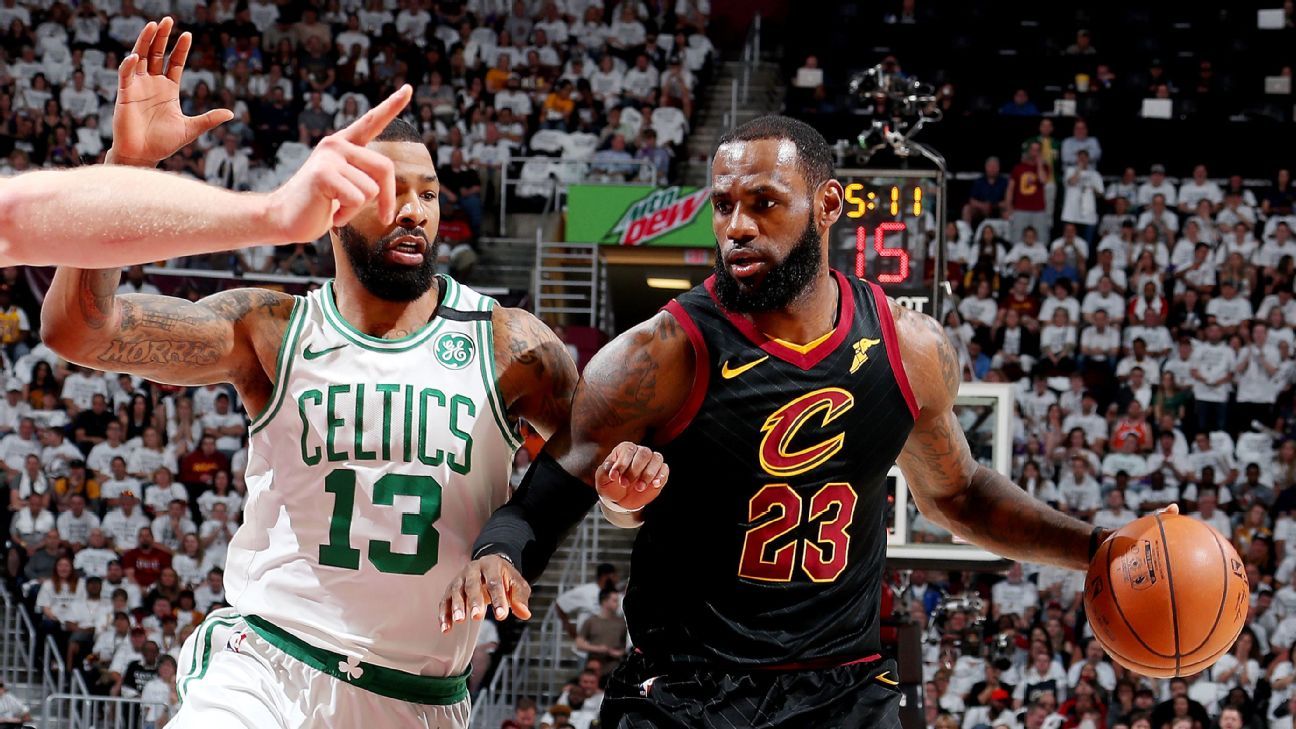 Home court has meant everything in this year’s Eastern Conference Finals between the Cleveland Cavaliers and Boston Celtics, as we come to a decisive Game 7 on Sunday night at TD Garden in Boston. LeBron James and the Cavs were on the brink of elimination after their third straight loss in Boston, but dug down deep to pull out a 109-99 Game 6 victory in Cleveland to even the series up with one game to go. James was his brilliant self when backed against a wall, pouring in 46 points to keep his streak of playing in seven consecutive NBA Finals alive. James, playing in perhaps his final game for the Cavs in Cleveland, added 11 rebounds and nine assists while playing all but two minutes. All-Star forward Kevin Love was knocked out of Game 6 in the first quarter after he banged heads with Boston’s Jayson Tatum and will likely miss Game 7 on Sunday. The Celtics are confident despite the Game 6 setback, knowing they are a perfect 10-0 this postseason at TD Garden and beat the Milwaukee Bucks in Game 7 in the first round at home. “It’s about just winning the game now,” Celtics guard Marcus Smart told reporters. “It’s not going to be pretty. You got to be able to get down and get dirty. You can’t go out and try to look pretty. You have to be ready for a dogfight.” Terry Rozier paced the Celtics with 28 points in Game 6, while Jaylen Brown had 27 for a Boston team that boasts six players averaging double-digits in points this postseason.

James didn’t escape Game 6 completely unscathed, as he was forced to play through a knee injury in the fourth quarter on Friday, and the team is expected to already be without Love after he was placed in the concussion protocol. The Cavaliers used a combination of players in the second half on Friday to fill the gap caused by the exit of Love, who has a history of concussions and did not play after the break. Jeff Green (14 points) and Larry Nance Jr. (10 points on 5-of-5 shooting) stepped up in Love’s absence and will be key to a road victory in Game 7. George Hill scored a postseason-best 20 points on 7-of-12 shooting in Game 6 and could be another key scoring option on Sunday.

Boston took the first three home games in the series by an average of 17 points and are looking forward to Game 7 at home. “It’s going to be a lot of fun, first and foremost,” Celtics point guard Terry Rozier told reporters of playing Game 7 at home. “…We need the whole city of Boston to be behind us. We know LeBron is different than a lot of other guys, but we’ve got to get the job done. That’s no excuse, so we’re looking forward to it.” The defense has been spectacular against Cleveland at TD Garden, holding them to 94 points or less in all three contests.

I’m sticking with the home team once again in this series as the Celtics are completely different in Boston. The role players and defense feed off the home crowd. I’ve said all along, Boston is the better team in this series despite the presence of James. Love being out will hurt Cleveland, but even with him in the lineup, I don’t see Boston losing at home.